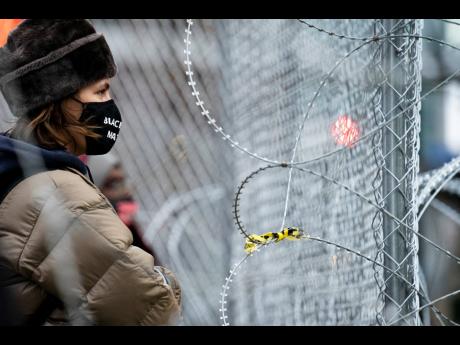 A week after a former Minneapolis cop was convicted of murdering George Floyd, the International Commission of Inquiry on Systemic Racist Police Violence Against People of African Descent has called for the defunding and demilitarisation of law enforcement in the United States (US).

Among the more than 30 recommendations to national and international policymakers in its report released on Tuesday is for the United Nations High Commissioner for Human Rights to call for greater accountability of police officials resorting to racist violence and unjustified force.

The commission has also recommended that the executive branch of the US government support the BREATHE Act.

The legislation will divest taxpayer dollars from policing that disproportionately criminalises black and brown communities and reinvest in other public-safety measures.

The 188-page report is the culmination of months of review of relevant documents and weeks of live hearings of 44 of the most egregious cases of people killed by police, spanning 20 years.

The commission of inquiry was born out of the May 25, 2020 police killing of George Floyd in Minneapolis, US.

The families of Floyd and Breonna Taylor, along with more than 600 human-rights groups, in June of last year, petitioned the United Nations Human Rights Council to appoint a commission of inquiry to investigate escalating police violence and systemic racism against people of African descent in the US.

The petition was opposed by the US and the United Nations declined to establish a commission of inquiry. It was eventually established by the International Association of Democratic Lawyers.

Derek Chauvin was convicted on all charges in the death of Floyd on April 20, 2021. He is set to be sentenced in June.

At Tuesday’s press conference launching the report, commission coordinator Lennox Hinds said that the families of victims have had to relive the “senseless, unjustified, and illegal executions” of their loved ones.

Hinds said the investigations found that all the killings were malicious and intentional and that the victims in all cases were unarmed.

The commissioners reported that pretextual traffic stops are a common precursor to police killings and the use of excessive force against people of African descent.

Further use of force against unarmed people of African descent during traffic and investigatory stops is driven by racial stereotypes and racial biases.

“Six of the 44 cases heard by the commissioners involved police use of deadly force during a traffic stop,” the findings of the report read.

Additionally, in hearing after hearing, the commissioners observed a pattern of police violations of the Fourth Amendment rights of black people to be secure in their persons, houses and effects from unreasonable searches and seizures.

Another finding shared by Commissioner Hina Julani of Pakistan was that lethal police violence against people of African descent was exacerbated by medical apartheid and police failure to provide medical attention.

“In 13 of the 44 cases that commissioners heard, police denial of, or failure to obtain, timely medical attention contributed to the deaths. Even more damning were the cases in which the police actively prevented medical treatment from being administered,” the report said.

Additionally, the commission observed an alarming pattern of manipulation of evidence, cover-ups, obstruction of justice, and collusion between various arms of law enforcement.

Jamaican attorney-at-law Bert Samuels shared that it was a painful exercise and that commissioners were often brought to tears.

Samuels said that the objectivity of the panel was heightened by the fact that 12 commissioners were located outside of the US.

“In our respective country, the US does come in to see and talk about extrajudicial killings in Jamaica and that we needed to do better than we were doing. We are used to the United States looking at our countries, so now that we are looking into the US, we are hoping that as outsiders making these recommendations, we will be seen to be objective and that help will come to the United States,” Samuels said.

He added that he was hopeful that the new Biden White House would be more receptive to the recommendations than the predecessor Trump administration.