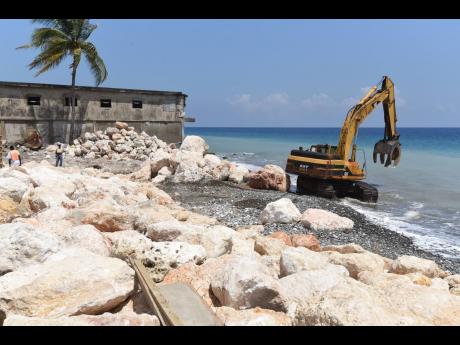 Ian Allen/Photographer
A tractor ventures into the sea in Buff Bay, Portland. A $41-million seawall project, which started three months ago, is scheduled to be completed in weeks. 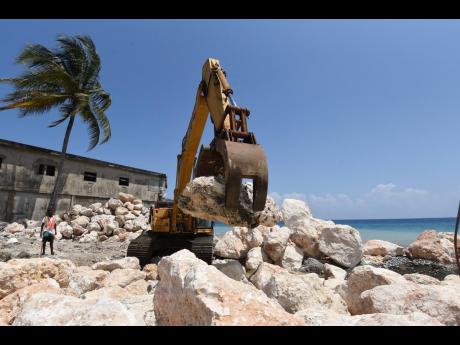 Ian Allen/Photographer
The seawall under construction in Buff Bay, Portland, has been hailed as crucial to the preservation of the structural integrity of properties along the coastline.
1
2

The Government is spending $41 million to construct a seawall along the coastline of Buff Bay, Portland, in an attempt to halt erosion along that corridor.

The construction, which is nearing completion, will not only preserve the integrity of the main thoroughfare but also protect the existing buildings in the vicinity of Sea Waves Club.

Project manager of Y.P. Seaton & Associates, Aston Laxman, said that the aim was to shore up the coastline from Annotto Bay to Orange Bay that has been adversely affected by high tide and erosion linked to climate change.

The project, which started three months ago, is expected to be completed in another three weeks.

“The sea levels are rising as a result of global warming and it’s a programme, I gather, where they are retaining all of the coastline areas,” Laxman told The Gleaner.

“... The entire coastline of Buff Bay and Orange Bay is under threat from erosion, which has also created serious damage to some commercial buildings.”

One business that has sustained serious damage is B&A Hardware in Buff Bay, which is operated by Arthur Tobi.

The operator is pleading for urgent action to protect his property as erosion has already cost him.

Tobi said he lost thousands of building blocks which collapsed and crumbled after a section of the property was undermined by the sea.

Tobi said he has had to purchase truckloads of aggregate, including boulders, to dump into craters to contain the damage.

“The area at the back of the building was a beach where people used to walk and swim in the water. Today, things have changed, and even though we constructed a retaining wall some years ago to prevent the sea from coming on to land, that wall has collapsed,” he told The Gleaner.

Meantime, Portland West Member of Parliament Daryl Vaz said that the coastline restoration project was the fruit of intense lobbying and he is hopeful that similar projects would be undertaken elsewhere in the parish.

“The effect of climate change is being felt along the coastlines,” said Vaz who, up to the summer of 2020, oversaw environmental matters under the Office of the Prime Minister.

“This coastline restoration project in Buff Bay will definitely make a difference in not only preserving the road network, but will also protect property owners and business establishments from future losses.”

Approval is being sought from Cabinet to commence restoration of the coastline in Annotto Bay to the tune of $180 million.

Work to preserve the shoreline in Orange Bay, which has experienced wide-scale erosion- resulting in the collapse of several buildings along the beach - is to be tabled for approval.