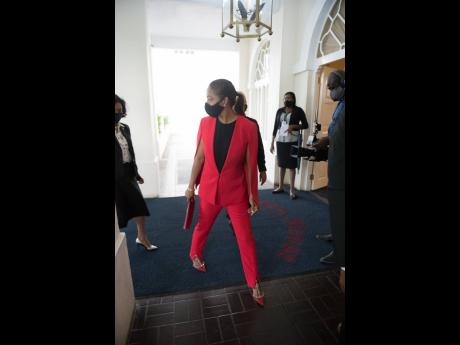 The Government’s principal legal officer has signalled that many practices in the public service were not in keeping with the law and that they placed the State in a position where it was almost impossible to mount successful court challenges.

In her contribution to the Sectoral Debate in Gordon House on Wednesday, Attorney General Marlene Malahoo Forte made a comment about the public sector that raised eyebrows.

“The lack of timely and sufficient instructions is particularly debilitating when we try to resolve issues in court. Because of what I see through the cases, I can say, regrettably, a lot of what is done in the civil service and the wider public service is not always in accordance with the law,” the attorney general stated.

“Most times, the intervention of the chambers is sought after the fact, with an expectation for miracles,” she said.

While acknowledging that there was some improvement over time, she said that the Government still had a long way to go in ordering its affairs for better outcomes.

For the period April 2020 to March 2021, the division received 398 additional files, which translate to more than one for every day of the year.

Staffed with 16 attorneys, the litigation division of the attorney general’s chambers received 398 additional files for the period April 2020 to March 31 this year. This means that the division has added to its previous workload more than one litigation matter per day for the period under review.

Turning to claims resulting from motor vehicle accidents involving government vehicles, Malahoo Forte said that despite the pandemic, a total of 306 new accident cases were placed before the Motor Vehicle Accident Project team.

In addition, she reported that there were 1,200 continuing matters being handled by government attorneys dating back to 2014. She said that the majority of the files relate to accidents involving the Jamaica Constabulary Force.

A total of 196 cases were disposed of over the period February 2020 to March 30 this year.

The attorney general reported that for the period under review, the project team successfully negotiated and settled matters, which resulted in the payment of a little more than $12 million.

At the same time, Malahoo Forte said that the Government had submitted demand letters to individuals and insurance companies for compensation as a result of damage done to government vehicles.

She said the Government had only recovered $88,000 over the reporting period. However, the attorney general warned that litigation would be pursued to recover $6.6 million from individuals or insurance companies.