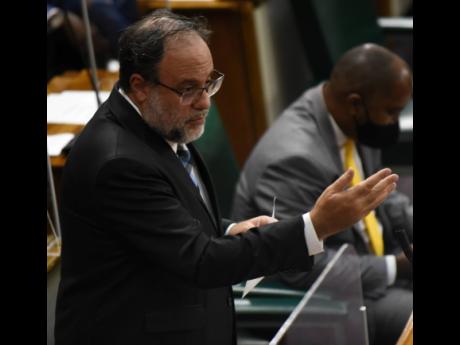 File
Opposition Leader Mark Golding has made good on his promise of tabling an impeachment bill.

Declaring that it was “now time for action, not only talk”, a leading advocacy group is urging Jamaicans to insist that partisanship not derail the freshly tabled bill to amend the Constitution for the impeachment of parliamentarians.

Professor Trevor Munroe, head of the National Integrity Action, said on Wednesday that failure to push through the long-gestating prospective legislation would deprive Jamaicans of an important tool to hold lawmakers to account.

Executive director of the Jamaica Accountability Meter Portal (JAMP), Jeanette Calder, welcomed the tabling of the bill by Opposition Leader Mark Golding to provide for the impeachment of senators and members of parliament in order to ensure the country was served “with utmost responsibility, integrity, loyalty, and efficiency”.

The impeachment bill is based on the 2011 proposed statute that former Prime Minister Bruce Golding pushed to have tabled in Parliament that same year, but it fell off the table and was never reintroduced until now.

The new legislative measure comes with some adjustments.

Munroe told The Gleaner on Wednesday that the tabling of an impeachment bill by Mark Golding was a positive renewal of the Bruce Golding initiative towards greater accountability.

“This motion will be even more significant were the Government and Opposition to jointly support such a provision as has been the case since 1995.”

Calls grew louder in recent times for the retabling of the impeachment bill following the George Wright saga in which the Westmoreland Central MP had been plunged into deep controversy over a video showing a man mercilessly abusing a woman.

However, the police have said that Wright and Tannisha Singh, who both made reports of assault against each other, have indicated that they no longer wished to press charges.

Calder said that she was especially heartened that the measure secured the requisite parliamentary support, which would see it becoming part of the legislative process.

The JAMP executive director urged lawmakers to advance the process by referring the bill to a joint select committee to allow for Jamaicans to make submissions on the proposed statute.

Recounting that 10 years had passed since the last Constitution Amendment Impeachment Bill was tabled in Parliament, Calder called on members of the Lower House to “act with all due diligence and urgency to ensure this bill makes its way to passage in the 2021-22 legislative year”.

The proposed legislation defines ‘impeachable offence’ as misconduct in the form of corruption or misappropriations of public funds or property.

Further, should the private bill get the nod from the legislature, a senator or member of parliament could be impeached for “refusal to exercise, or persistent neglect in the exercise of, the duties or responsibilities of the office” held by the lawmaker. Impeachment proceedings could also be pursued for abuse of official authority and deliberately misleading or intentionally abusing the privileges of Parliament.