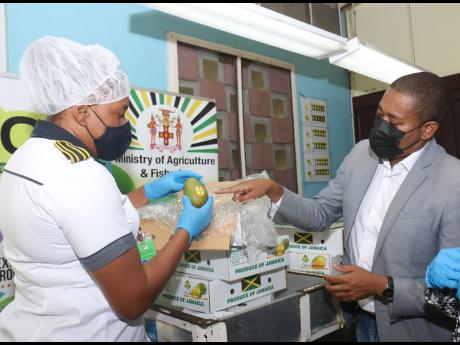 Agriculture Minister Floyd Green says he is confident that the construction of a hot-water treatment plant, which is slated to be completed during the current financial year, will help to open more doors for Jamaica in the mango-export market.

“The United States Department of Agriculture (USDA) has just approved Jamaica to construct a hot-water treatment plant,” said Green, who was speaking to the media after viewing Jamaica’s first shipment of more than 1,000 boxes of mangoes to the United States for 2021 yesterday at the Sangster International Airport in Montego Bay.

“What we expect is that through public-private partnership, we will construct that plant within this financial year, so that by next mango season, we should be doing more of the process here in Jamaica, and that will really open up mango exportation into the United States to a lot more mango farmers,” Green explained.

“We think that is a tremendous development and a wonderful opportunity for our exportation of mangoes... we continue to expand our export reach, and we continue to take our fruits, the best fruits in the world, to the world,” he added.

Jamaica resumed shipment of mangoes to the United States in 2019, shipping some 8,151 kilograms of the fruit to that country after having been out of that market since 1999. Between January and October 2020, it was reported that 100,000 pounds (45,359 kilograms) of Jamaican mangoes were sold in the United States.

Prior to the 2019 shipment, the USDA had given clearance for Jamaica’s mango exports in 2014. Part of the required process at that time was for the mangoes to undergo irradiation, which involved the use of ionising radiation to sterilise fruit flies and make them unable to reproduce.

In the meantime, Green said that the growth of Jamaica’s mango-export programme should result in an increase in this year’s overall export output.

“We are very happy to see the growth of the programme, as we are doing over 1,000 boxes of mangoes, and this is just the first shipment for the season. We have moved tremendously from when we had only two registered farmers to now having over 18 farmers that are registered, plus we had only one registered exporter and now we have nine exporters, and we are looking to see tremendous growth in this season,” said Green