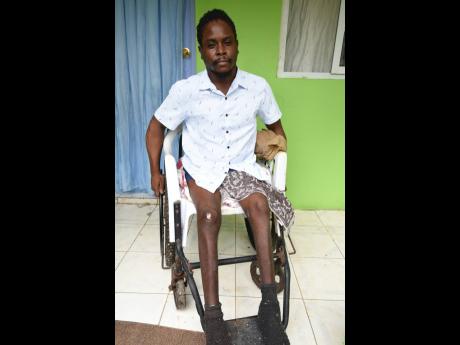 Ian Allen/Photographer
Randall Robinson, who was left crippled by a gunman’s bullet near Ivy’s Corner in August Town. 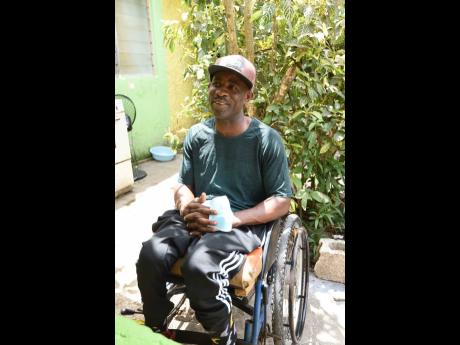 Ian Allen/Photographer
Kenneth Dennis was shot by gunmen while waiting to play a game of dominoes in August Town. He is crippled from the waist down.
1
2

Jonielle Daley/Staff Reporter August Town has for long been a hotspot of gun violence, but one particular spot, Ivy’s Corner, has cast a haunting spell over the crime-ridden St Andrew community. At 21, Randall Robinson was shot at the bus stop at...

August Town has for long been a hotspot of gun violence, but one particular spot, Ivy’s Corner, has cast a haunting spell over the crime-ridden St Andrew community.

At 21, Randall Robinson was shot at the bus stop at Ivy’s Corner on his way to work one morning in 2006.

In a bid to be punctual, he went by that location instead of walking to the bus stop closer to the August Town Police Station as other residents had done precautionarily because of gang warfare.

Robinson recalled hearing shots being fired behind him before he fell on his face.

“When I look up, I saw the woman and the children like they frighten, like they trying to run … like panic. Around two or three more explosions I hear,” he told The Gleaner.

After being rushed to the University Hospital of the West Indies by the police and waking up still unable to move, the doctors informed him that a bullet was lodged in his spine, paralysing his lower body.

“I couldn’t even sit up without them holding me,” he said.

The opportunity to leave his job as a waiter at a Chinese restaurant for employment he had secured on a ship evaporated before his eyes.

The toll of gun violence in Jamaica goes beyond the calculation of medical care - the Kingston Public Hospital tended to 816 gunshot victims in 2020 alone - spelling the end to untold dreams by the displacement caused by disability.

Robinson believes that he was the victim of “mistaken identity”, forcing him to depend on his parents to care for him until their passing.

Now, the 36-year-old, who moves around in a wheelchair, is struggling to build a bathroom right next to his bedroom as he has mobility difficulties in accessing a bathroom at the back of the house.

As Robinson seeks to make his home more disabled-friendly, he says that he has fallen through the cracks of the social-safety system, having reportedly applied twice, in vain, in the last 15 years to tap welfare through the Programme of Advancement Through Health and Education.

Robinson’s friend, Kenneth Dennis, who was also paralysed by a bullet, harbors dreams of becoming an architect one day.

Dennis lent a helping hand by replacing the roof on Robinson’s dwelling shortly after the 2006 tragedy. But little did he know that seven years later, he, too, would have to move around in a wheelchair because of yet another shooting at Ivy’s Corner.

He was at a domino tournament when shots rang out in a presumed reprisal for a previous shooting.

That night, a bullet pierced the right side of his body, near the chest, and exited on the left. Another penetrated his abdomen. A third struck his spine when he attempted to run for his life.

The 44-year-old said the 2013 incident was the second time getting shot at Ivy’s Corner. He had sustained a gunshot wound to his buttock in 2007 while coming from work.

“So some time when me a pass all da place deh now, me push a likkle faster,” Dennis told The Gleaner. “Mi nuh want the third time fi really happen deh so.”

Dennis, who has a good rapport with residents because of the number of construction jobs he has done in August Town, said he has learnt to adapt to life in a wheelchair, tiling his kitchen floor and constructing a ramp for access.

Expressing hope that he will walk again, Dennis dismisses notions that being paralysed warrants pity. Instead, he said he wants to empower people with disabilities in a more inclusive society.

Kenneth Wilson, August Town’s community liaison officer for the Ministry of Justice’s Restorative Justice Unit, said many have been injured or killed in gun violence in August Town, more specifically, at Ivy’s Corner.

He said that the community has been calmer now with the continued presence of the security forces since the imposition of a zone of special operations (ZOSO) in July 2020.

“People don’t want the ZOSO to end because now, they get to move about freely,” he said.