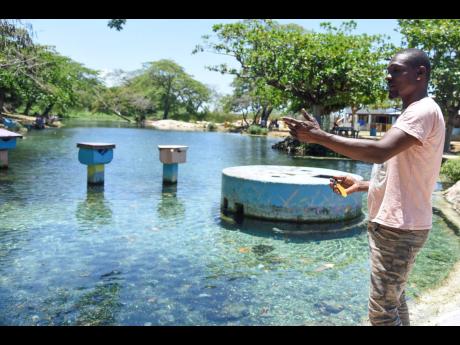 Nicholas Nunes/Photographer
Tyron Wilson said that since the coronavirus shutdown, people who benefit from the Caymanas River turned to other trades like plumbing and welding to put food on their table. Wilson said that in the pre-pandemic era, the river would have been full of leisure seekers. 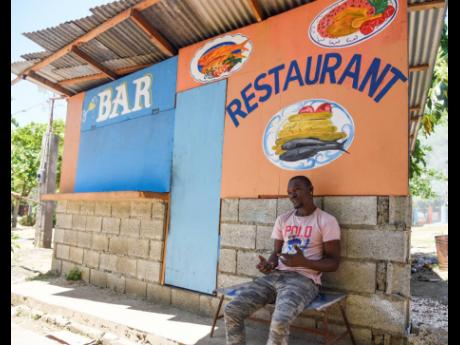 Nicholas Nunes/Photographer
Tyron Wilson sits in front of his food shop near the Caymanas River on Tuesday, May 4. COVID-19 protocols have caused a lockdown of dozens of rivers and beaches across Jamaica.
1
2

Several residents of Caymanas Bay in St Catherine have been without an income since the closure of Nature’s Paradise, the major attraction in the area.

The river, which is also used as an event venue, has been shuttered because of COVID-19 restrictions.

Tyrone Wilson, one of the major food and beverage operators on the property, revealed that he has had a fallout of close to $5 million since April 2020.

The 43-year-old, who has resided in the area all his life, was the employer of six residents up to last year.

“This is what the community use to send children to school, pay bills, and put food on the table, but we just have to abide by what the Government says,” he said.

Wilson said that some residents have been able to pick up jobs in construction in an effort to survive.

He has been running the establishment for more than three years, serving up to 50 customers on weekdays and more than 200 on weekends.

Wilson is grateful that he had another source of income that has allowed him to weather the COVID-19 storm.

“If I was depending on Nature’s Paradise alone, me woulda inna trouble, ‘cause me have house mortgage, car loan, student loan, and my daughter’s school fee fi pay,” he said.

Though the river is closed, he said it has to be maintained regularly.

“This water costs up to $200,000 a month to clean it. Sometimes we jus haffi cook a pot and unite di youths dem inna di community to clean it when we can’t pay dem the full money, ‘cause is $4,000 a hour,” he told The Gleaner.

With the summer holidays approaching, he said it would be a blessing if the attraction is allowed to reopen.

“The best part of our business is summer when visitors come here and when di kids dem deh home,” said Wilson.

Judine Williams, 33, usually sells food at the river but recently pivoted by setting up an order-and-delivery system in the community.

Before that, Williams disclosed that she often prepared food, but limited sales sometimes force her to take meals back home for her family to eat.

Williams pointed out that though sales are picking up with deliveries, it is nothing compared to times past.

Meanwhile, Petrina Folkes, who operates a bar just across the road from the river, told The Gleaner a similar tale.

“I get about 40 per cent of my customers from the river. I have been affected really bad.

“Things get very low and I have to depend on the community to buy from the bar and we have less people here now because some moved out because of crime,” the bartender said.

She is hoping that the river will be reopened soon but said based on the current number of COVID-19 infections, that may not be a reality.

Folkes could not give an estimate of her losses but noted that it has been difficult to make ends meet.