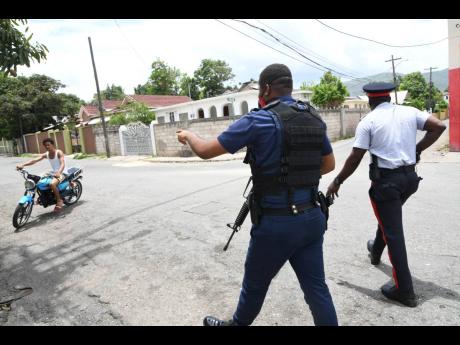 File
Policemen beckon to a motorcyclist to stop near a state-of-emergency checkpoint in central Kingston on Sunday, June 14, 2020.

The Independent Commission of Investigations turned the spotlight on the often vexed issue of stop-and-search exercises carried out by the Jamaica Constabulary Force (JCF) even as the oversight body reminded law enforcers that the court had ruled eight years ago against arbitrary action.

In its first quarterly report for this year, INDECOM also reviewed another controversial issue: of entry and search of premises over a two-year period.

In a case study covering the years 2019 and 2020, INDECOM said it received 21 complaints about stop-and-search action.

The watchdog noted that there had also been more than 700 assault allegations for both years. According to INDECOM, the catalyst for the assault complaints, in many instances, stemmed from the stops, or stop-and-search commands, or actions of the officers.

The commission reported that 15 of the 21 persons were arrested following the stop-and-search actions. The majority of the 15 arrests arose following verbal spats between persons and the police that subsequently escalated.

Of note, according to INDECOM, was the ‘unprofessional conduct’ complaint also alleged against the police in 20 of the 21 cases received (11 in 2019 and all nine matters in 2020). “The public’s complaint of JCF officers being ‘unprofessional’ is a feature of numerous interactions between the citizen and police,” the commission added.

Of the 21 cases reported, one officer was charged, one awaits a decision of the Office of the Director of Public Prosecutions, it was recommended that a third should not be charged, and one complaint was withdrawn. The other cases remain subjects of further enquiry or with INDECOM’s legal department for final assessment.

On the issue of stop and search, INDECOM pointed to a 2013 ruling in the Supreme Court by Puisne Judge David Batts in the Hemans v The Attorney General matter. The court stated that there was a significant misunderstanding in the JCF’s interpretation of its power to stop and search as it relates to the Road Traffic Act.

Justice Batts, in his ruling, declared that there was no power to arbitrarily stop and search vehicles. He argued that officers required ‘lawful reason’ to stop a vehicle or for a search. Such lawfulness would arise from an officer’s ‘reasonable grounds to suspect’ before embarking on a search or arrest.

However, according to INDECOM, despite clear guidance and admonishment of misconceived police powers, identified from the 2013 ruling, the oversight body continues to receive complaints from persons allegedly being stopped and searched by the police without justifiable cause and without adopting current force policy.

“In many of these complaints, allegations of unprofessional conduct are also cited against members of the JCF, which frequently leads to verbal spats, persons allegedly assaulted and thereafter arrested. In many instances, when persons are stopped, or stopped and searched, they are not informed of the reason for such action,” the commission’s quarterly report stated.

Expressing concern, INDECOM said that such police action was a source of continual friction and confrontation with citizens. “Whilst reported complaints of illegal search, as a proportion of total complaints received, are relatively low (and likely under-reported), they are indicative of an oppressive policing style and culture which would benefit from reflection and a change of attitude and enhanced professionalism,” the police watchdog contended.

Turning to entry and search of premises by the police, INDECOM said that for the period 2016 to 2020, the commission received 79 complaints concerning this type of action by the police.

However, the oversight body zoomed in on 36 complaints that fell into the illegal entry and illegal search categories between 2019 and 2020. Ten were received in 2019 and 26 in 2020.

Of the 10 complaints received in 2019, only one homeowner reported being informed that there was a search warrant and alleged that it was never produced.

In the other six cases, the police reportedly did not act professionally. In two out of the six cases, they gave reasons for their searches, and in three, they made arrests.

The oversight body reported that this pattern continued in 2020. Of the 26 complaints received, the police did not provide, produce, or have a search warrant in 23 instances, albeit five cases fell under the enhanced security measures zone.