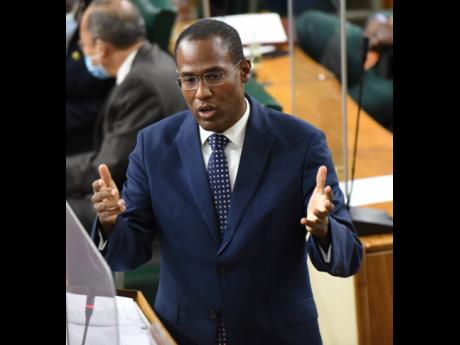 File
Dr Nigel Clarke: "The proper thing to do in terms of ensuring that we abide by good principles is that we go ahead with ... execution by China Harbour.”

There will be no tender process for the multibillion-dollar Montego Bay Perimeter Road project that has been designated a national development project by the Government and which is to be funded by Jamaican taxpayers.

For the current fiscal year, the Government has allocated $1.2 billion in the Budget to commence works on the project.

Finance and the Public Service Minister Dr Nigel Clarke opened debate on Wednesday on the Public Procurement (National Development Project) (Montego Bay Perimeter Road Project) Order, 2021 and a resolution by a similar name, which is intended to give effect to the first such project of its kind locally.

Clarke told his parliamentary colleagues that the order represented the first one being made in relation to the Public Procurement Act.

It was initially proposed that a loan be obtained from the China Ex-Im Bank to execute the works and that funding would be linked to China Harbour Engineering Company carrying out the contract.

Clarke said that at a point, the finance ministry indicated that Jamaica did not need to borrow from China to carry out the major project.

The finance minister said that based on the fact that China Harbour had carried out the feasibility analysis and all the preliminary works, “the proper thing to do in terms of ensuring that we abide by good principles is that we go ahead with the other part of that plan, which is the execution by China Harbour”.

Cabinet made the decision to declare the Montego Bay Perimeter Road a national development project on March 17 this year.

Commenting on the problem of traffic congestion in the Second City, Clarke said that the economic capital of Jamaica was constrained by the inability to move. He said that people had challenges commuting to and from work and that the loss of productivity was an economic cost and burden to the society.

The order set out certain matters for which the finance minister may declare, subject to affirmative resolution, that the Public Procurement Act, or any provision of the act, shall not apply. “This paragraph indicates that the minister has the authority to make such an order subject to terms and conditions which he may specify,” Clarke said.

He said that the project would provide employment for a significant proportion of Jamaican workers. According to Clarke, the workers would benefit from knowledge and technology transfer from the non-national workers involved in the project.

The order also provides that suitable and available goods, services, and components originating from Jamaica should be utilised for the project.

Opposition Leader Mark Golding indicated that he would not debate the order, which was tabled on Wednesday. He told government lawmakers that the parliamentary Opposition would make their contribution at the next sitting.

“It was only tabled today (Wednesday). This is a massive project, and I would like to have the opportunity to discuss it amongst the Opposition to see what position we are going to take on it,” Golding said.