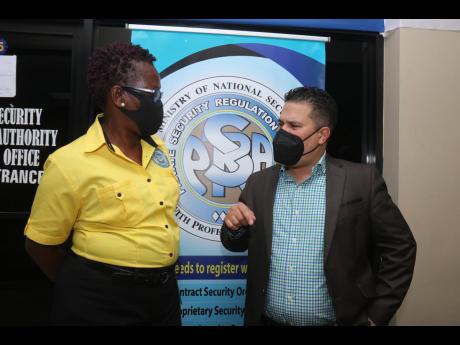 Despite the Government making the Oxford-AstraZeneca COVID-19 jab available, some 10 per cent of the prison population has so far taken the shot.

The disclosure was made Thursday by Senator Matthew Samuda, minister without portfolio in the Ministry of National Security with responsibility for the correctional services, as he toured the offices of the western regional headquarters of the Private Security Regulations Authority in Montego Bay St James.

“I don’t have exact numbers now, but I would ‘guesstimate’ it’s in the range of about 300, which is about 10 per cent of our population, which is not where we want to be,” Samuda told reporters.

“[I am] not happy with it, but the first target is to ensure that the public knows and that those who are vulnerable had it made available to them,” he said. “We can’t force anyone to take it, but we made it available.”

He is banking on a greater level of take-up as the programme continues.

There are approximately 3,000 inmates spread across the country’s penal institutions, and according to Samuda, the goal of the ministry and the correctional services is to get 70 per cent of that number vaccinated against COVID-19, with a heavy focus on inmates who are bedridden, aged, and those with comorbidities.

“We haven’t gotten the sort of number and uptake that we would like because the vaccine hesitancy is even more increased in our correctional facilities. It’s something we are going to have to overcome,” Samuda stated.

Two inmates and three correctional officers have died from COVID-19 since the island recorded its first case last March.

Samuda said that the ban on visits to penal facilities, which was imposed to limit the prisoners’ contact with outside parties to reduce the risk of transmission, is a major obstacle to the psychosocial well-being of inmates.