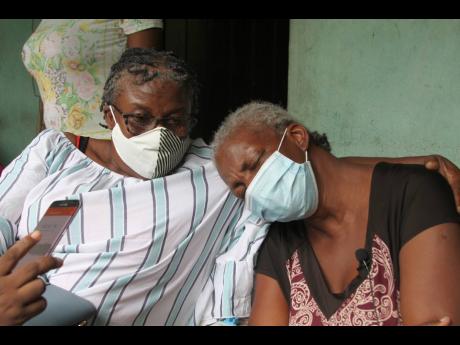 Nathaniel Stewart/Photographer
Mom Lorna Ellis (left) and aunt Janette Reid comfort each other yesterday as they grieve the death of Renford ‘Hector’ Mowen, of Ballards River in Clarendon, who died in a crash on Tuesday. 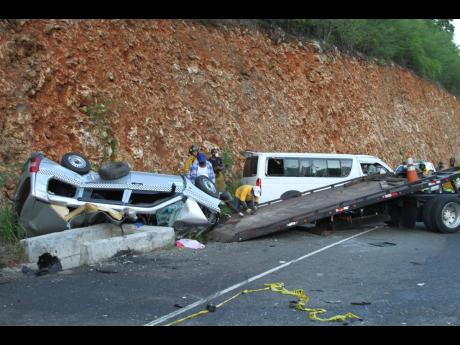 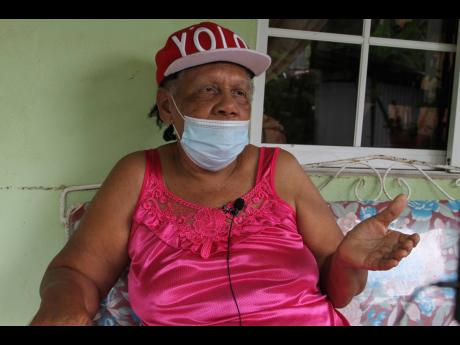 Dena Golding, aunt of 37-year-old taxi operator Renford ‘Hector’ Mowen, who died in a multi-vehicle collision on Tuesday, said she warned him about the dangers of the road the previous day.

Golding said she saw Mowen on Monday morning debushing the roadside by his house and went to talk to him.

“Mi say to him, ‘Boy, you mean you come teck it after you daddy (her late brother), for same way him woulda work out him soul case. Mind yuh nerves’,” she related to The Gleaner.

She said he told her that he would be heading out on the road, and it was at that point that she warned him to be careful.

“Mi say, ‘Careful, you know, Hector. Do, mi a beg you. Watch di road. Watch di road and di mad people dem ‘cause you know di people dem mad’,” she shared, stating that he agreed with her and vowed to be careful.

Making a visible effort to bring her emotions under control, Golding said that she couldn’t stop crying after she heard the news of his death.

“Poor Hector. Him nuh trouble people. Quiet and good bwoy ... . Mi nuh know how dis happen to him. Him so good, enuh,” she uttered.

Golding said Mowen, who had been in an accident a few weeks ago, decided to go back on the road early to provide for his son and mother.

Metres from Golding’s home in Ballards River, Mowen’s mother, Lorna Ellis, was being consoled at her home by his aunt, Janette Reid, and his sister, Jeneva Mowen.

Ellis shared that she last saw her son last week Tuesday when he spotted her by the roadside and gave her a ride home and said, “See you, Mommy’.”

On Tuesday, before her daughter, Jeneva, broke the news, she asked if she had taken her hypertension medication.

After asking her to sit, Jeneva broke the tragic news, Ellis recalled before breaking down in tears once more.

Reid recalls how her nephew was “troublesome” and never referred to her as “Aunty” but cheekily called her by her first name.

“He is a loving boy, very loving. Even when he sees me, him nuh say ‘Aunty’. Him just call mi by mi name. Mi sey, ‘Boy, mi and you nuh companion. Him just laugh,” she recalled.