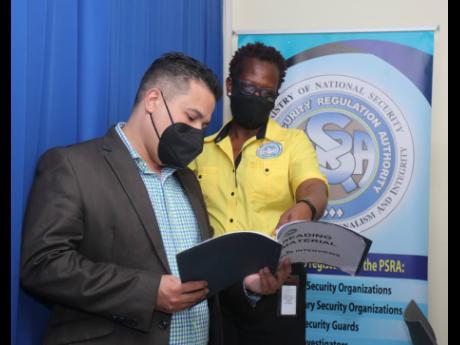 Ashley Anguin/Photographer
Senator Matthew Samuda, minister without portfolio in the Ministry of National Security, and Vivette Webber McLaughlin, operations manager of the western regional branch of the Private Security Regulations Authority in Montego Bay, St James, look through an information booklet as the minister toured the offices yesterday.

Senator Matthew Samuda says the Government’s ambitious drive to bring unregulated security companies in line with established operating policies and guidelines has been hampered by the COVID-19 pandemic.

“The pandemic has hit the legal and illegal security companies,” said Samuda, minister without portfolio in the Ministry of National Security, during a tour of the western headquarters of the Private Security Regulations Authority (PSRA) in Montego Bay, St James.

“I wouldn’t classify them quite as illegal. I classify them as unregulated. They are legally registered businesses. What they [are] not doing is complying with all of the regulations in the space,” added Samuda.

With that challenge, Samuda, who has responsibility for the PSRA, an agency of the Ministry of National Security, said efforts will be made to partner with unregulated stakeholders to improve and maintain the standards of the private-security industry.

“Now, our job at PSRA is to bring them [in line] and to ensure that they function because it’s about standardisation and ensuring that the industry itself is buoyant and healthy that when people see security guards, they can be assured of a particular minimum of the standard of delivery,” continued Samuda.

“Opening and increasing our footprints in the west has certainly increased our ability to regulate and monitor the space in western Jamaica, but it’s difficult to determine just how much of an impact we’ve had because of the fallout in employment in the sector, even though we have started to see a comeback faster than we are expecting,” added Samuda.

Vivette Webber McLaughlin, operations manager at the PSRA’s western regional headquarters, told The Gleaner that since the office became operational nine months ago, a total of 61 security companies have been registered and are being regulated across the region. Of the number, St James accounts for 41 of those companies.

She noted that several companies have also since regularised their operations.

“It is now a little easier to operate from here (St James) to do what we called spot checks in terms of trying to find illegal companies,” Webber McLaughlin said. “Even those who are complying with the law, we visit and let them know that we are here. We also do spot checks on individual security guards just to make sure that they are compliant with the regulations.”

The western regional headquarters, located on Union Street in Montego Bay, is being used to support the private-security industry by increasing performance, monitoring compliance, facilitating registration for both personnel and companies, and providing assistance to industry stakeholders.

As at December 2019, approximately 24,000 private security personnel were registered with the PSRA.