Gunshot victim killed in crash during rush to hospital 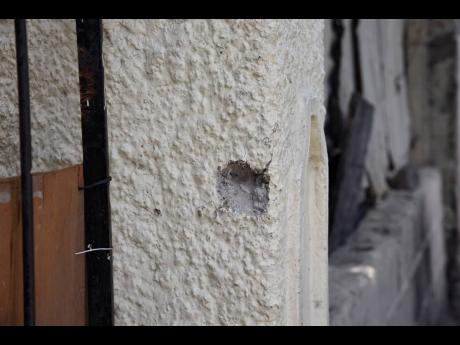 Nicholas Nunes/Photographer
A concrete fence on Lincoln Avenue in Kingston 13 shows tell-tale signs of an attack by gunmen who opened fire on persons in the community on April 25. Yesterday, The Gleaner visited the community and spoke with the spouse of taxi driver Ricardo Bailey who had been shot but reportedly died from head injuries he received from a traffic crash while being rushed to hospital. 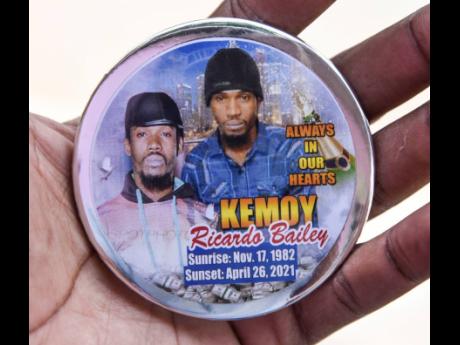 Nicholas Nunes/Photographer
Ricardo Bailey, taxi driver who was shot on April 25 but reportedly succumbed to head injuries he received when the vehicle he was being transported to hospital in crashed.
1
2

A man has been warned for prosecution after a fatal crash reportedly claimed the life of his friend, a taxi operator, he was transporting to hospital, after a drive-by on Lincoln Avenue on April 25. The dead man is 38-year-old Ricardo Bailey,...

A man has been warned for prosecution after a fatal crash reportedly claimed the life of his friend, a taxi operator, he was transporting to hospital, after a drive-by on Lincoln Avenue on April 25.

Bailey was shot by heavily armed men on Lincoln Avenue and was among five passengers who crashed in his own taxi, not far away at the intersection of Lincoln Road and Lyndhurst Crescent.

He succumbed to head injuries at the Kingston Public Hospital on April 26 after an emergency surgery.

The Gleaner visited the community yesterday and Bailey’s spouse, who had been injured in the crash, was still reeling from the tragedy and how things unfolded.

Bailey’s spouse was too distraught to speak and wept as she spoke briefly to our news team.

According to the mother of Bailey’s youngest child, utterances came as recent as yesterday from the young girl who said she was going to see her father soon.

“She too young to understand cause this morning (yesterday) she still a say she ago see daddy,” she said before walking away in tears.

Bailey’s spouse suffered a broken right hand and injuries to her head in the ill-fated crash.

The late taxi man’s friends told The Gleaner that a family lost a breadwinner who steered clear of violence and was a committed worker in the transport sector up to the time of his death.

“A rush him a rush go hospital and bare madness… accident, lick him head, skull injury and him have difficulty breathing. Anuh the gunshot, cause him rise, everybody can remember him a say mi good, mi alright… a just tru the braking system on the car. The driver can drive, him drive truck and ride bike,” a resident told The Gleaner.

A small gathering had assembled on Lincoln Avenue because of a birthday celebration and that was when the gunmen struck.

“A just Kemar (got shot) and is not shot kill Kemar a di accident… Dem and nobody weh dem a war with never deh ya suh… dem definitely come fi hurt people weh no business with dem and dem foolishness…”, an elder said.

The Gleaner was told that more than 60 spent shells from high-powered rifles and semi-automatic pistols littered the scene.

“The car pulled up and all four doors opened and dem just start walk and shoot. Is the rifleman shoot him. When Kemar realise him a try cover but he got shot on his hand and legs. He had to roll under his car… the shooter leave him and turn the gun over some yard cause people a run up and down,” a resident said.

Bailey’s Probox, according to members of the community, was never driven by anyone except him.

A relative of the driver of the crashed car told our news team that he was warned for prosecution relating to manslaughter.

“My boy really nuh understand Kemar car. Him have a way with his car, if you go weh too fast wid fi him car, you ago crash. A him know how to control that car cause him a do taxi with it for years,” a resident said.

The Gleaner understands that the violence has not gone unnoticed by Member of Parliament for St Andrew South Mark Golding, who has reportedly visited the area and held talks with residents.

Lincoln Avenue has been tense since the start of the year.

There was a triple murder in January which is believed to be a reprisal for an earlier murder on Lincoln Avenue, that same week.

Since then, there has been several shootings and another murder before the April 25 attack.

A police post has been erected at Lincoln Avenue and Lincoln Road corner.

The Kingston West police say their investigation into Bailey’s shooting is ongoing.