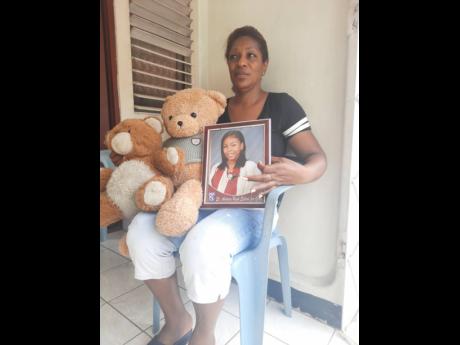 Photo by Corey Robinson
Khanice Jackson’s mom, Eunice Chambers, holds a photo of her daughter, along with her teddy bear, as she forecasts what Mother’s Day will be like without the 20-year-old, who was killed recently.

Waking up to reports of another murder in Jamaica is depressing in itself, but when that victim turns out to be your missing daughter – found strangled, bound and discarded in bushes – it invokes a terror that turns Mother’s Day and almost all other days into a whirlwind of despair.

That’s how it has been for Eunice Chambers since March 26 when her beloved daughter and only child Khanice Jackson’s body was found. Twenty years of joyful times, for the most part, have turned into haunting memories, lingering behind each wall of their Independence City home in Portmore, St Catherine.

Sometimes it is overbearing, and at those times, Chambers hugs her daughter’s favourite teddy bear and cries. Today, she fears the tears will flow harder.

“Because of the way she passed, I’m just feeling down. If she was sick or in an accident, I would feel it but not like how I am feeling it right now. If he hadn’t killed her, she would be here right now,” Chambers said last week, clutching a picture and her daughter’s go-to stuffed animal.

“I don’t feel like getting out of bed. I just stay in bed all day. The energy is not there I have this weak feeling and I just keep remembering her. Sometimes I don’t even feel like going on. She was my daughter, my best friend. It was me and her straight through,” she said, adding that March 24, the last day she saw her daughter alive, will never be forgotten.

“That can never come out of my brain. She was the only child for me. I don’t know when I will ever get over it. I don’t know,” she continued.

ONLY SOURCE OF LAUGHTER

Last week, her niece, Neva, comforted the grieving mother as she spoke. Neva’s gimmicks have been Chambers’ only source of laughter for the last two months.

“When she is not here and I’m by myself, I go right back to that [bad] feeling. It is only she who can cheer me up.”

Separation from common routines, she said – like Khanice cheerfully demanding that Chambers open the front grille in the evenings, despite having her own key, or her jumping into bed between her and Neva – pails in comparison to the pain she feels on seeing her daughter’s empty room, her sanctuary, each day.

Police have charged Robert Fowler, a 50-year-old mechanic, for Khanice’s death. Sleuths believe that he returned home after picking up Khanice en route to work ­­­– a usual practice in the weeks before her death – where an argument developed and he strangled her. He left her body at his house that day before returning to discard it along Dyke Road in Portmore.

Outside of those details, investigators are keeping the investigation close to their chest.

Fowler, also known as ‘Backra’, is to return to before the courts on July 8.

“My niece will have to help me through this Mother’s Day. She (Khanice) was a good artist, and on Mother’s Day she would always draw me something nice. I wouldn’t wish this on my worst enemy, what I’m going through now. I see people crying on the TV all the time when they lose their daughter and their sons. I feel it for them, but when your foot is in that shoe, it is a different thing,” she continued, restraining her tears.