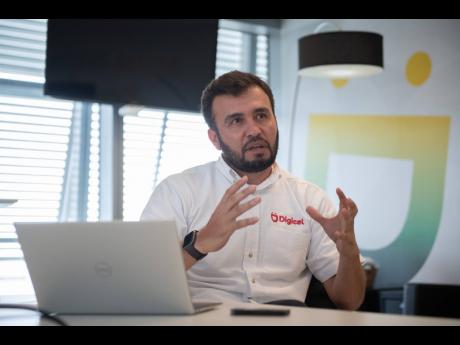 Acknowledging that there are challenges with its network, Digicel CEO Jabbor Kayumov says, if the company is able to get more spectrum, customers across the island could see an immediate fix to Internet connectivity issues. Over the past year, the...

Acknowledging that there are challenges with its network, Digicel CEO Jabbor Kayumov says, if the company is able to get more spectrum, customers across the island could see an immediate fix to Internet connectivity issues.

Over the past year, the COVID-19 pandemic has added increased load to the company’s network, with schools shuttered and moving online and many companies putting in place work-from-home arrangements.

But teachers, students and some industries have complained about unreliable service issues in the sector, with connectivity and speed being major sources of pain.

Noting the company’s gratitude for the temporary allocation of spectrum at the onset of the pandemic to address the spike in demand that came, Kayumov said that more government support was needed to allow telecoms providers to make more improvements in the sector.

“With further support from the Government and regulators in Jamaica, we can do more. We have almost 1,000 sites and we can build more, but there a few things that we can fix, even without building sites,” the Digicel boss said.

“We are serving over two million [customers]. If we get additional spectrum, we can definitely increase the capacity and provide better quality for customers. Those who have been struggling with speed and capacity – the rural areas – would get an immediate fix,” he said.

“If we start seeing government support, not necessarily on subsidies, but on things like 5G and new technology, things will definitely accelerate,” Kayumov told The Sunday Gleaner.

Digicel went into the pandemic with 99 per cent population coverage through its mobile service, “but that was not sufficient to address the rapid growth of connectivity demand due to COVID-19, because many people started working from home”, Kayumov acknowledged, adding that mobile customers felt the brunt of the impact.

“We did a lot of things to address that need, specifically in the rural areas, where customers felt a bit disconnected,” he said.

The Digicel CEO said that, despite suffering a US$850,000 or J$129 million loss from theft of its equipment in the last financial year, Digicel Jamaica has increased its spend on infrastructure upgrades over the last 12 months, to keep pace with customer demand amid the current pandemic.

The company, which is celebrating 20 years of operation, shelled out some US$100 million to add capacity to its network when the pandemic hit.

“We are planning to keep that level of accelerated investments over the next 12 months,” Kayumov said.

For the just-ended financial year, the company, with the help of the police’s Counter-Terrorism and Organised Crime Investigations Branch (CTOC), was also able to hold nine persons accountable for the theft of its equipment.

In a sitdown with The Sunday Gleaner to discuss the company’s footprint locally as well as its plans to improve its service, given the raft of complaints levelled against telecoms providers since the onset of the COVID-19 pandemic, Kayumov said, while the theft feeds into the issues customers face with the quality of service, Digicel is committed to improving the telecoms landscape with further investments.

He said that while the company doesn’t openly lament the losses due to theft, “it doesn’t mean that we don’t have the problem. We just keep doing what we do because the main thing is for us to serve our clients.”

To help to combat the issues of theft faced by the telecoms providers, then Technology Minister Fayval Williams committed, in November 2019, to strengthening the legislation by increasing the penalties for theft and vandalism of network equipment across Jamaica.

Yesterday, current Technology Minister Daryl Vaz told The Sunday Gleaner: “The ministry is awaiting the comments of the Attorney General’s Chambers on the Cabinet submissions regarding the amendments to the penalties in legislation within its portfolio. As soon as the comments are received, the ministry will be going to Cabinet.”

In the last 12 months, Digicel has also built 400 Long-Term Evolution Time-Division Duplex (LTE-TDD or TDD-LTE) cell sites, “which helped us to address the increased demand, to a certain extent”, the CEO said, adding that the company recognises that “there is still a lot of work to be done”.

Last March, Williams also described the telecoms sector as “inadequate”, as schools and workplaces shifted to virtual set-ups, as a containment measure against the pandemic.

She also pledged new rules to govern the standards by players in the telecoms sector in the wake of customer complaints of poor service, including dropped calls and difficulties making calls across networks.

However, in defence of the company’s track record, Kayumov believes “Digicel’s reaction was fast enough”, though he admits the company has learnt some invaluable lessons.

“It is obvious that the pandemic came and nobody was expecting the impact it had. There are a lot of areas that became unveiled. Can we do better with telecoms as an industry and as a community? I am sure we can, but where Digicel can help is exactly as we are doing now,” he said, referencing the investments to upgrade its infrastructure.

Jamaica, however, may not be quite ready for new developments like 5G technology, the Digicel boss noted, pointing to the absence of several things to support the launch and take-up of the technology.

“5G is more a marketing term at this stage. It has its advantages, but if you check the statistics, the majority of the phones don’t have 5G capability, and if Digicel were to build out a 5G network, only about one per cent Jamaica, if not less, would be able to benefit from this,” Kayumov said.

For now, only 5G solutions tailored for companies would make the segment attractive enough to be worth the investment in the outlay it would require to launch the service locally, he said.

“It will come, but it is not going to be for mass coverage,” Kayumov said, referencing the absence of carpet coverage, even in the United States where 5G is in use.

Digicel also wants the Government to set a special tariff on electricity for the industry “because the current cost is a bit unfair”, he said.

“The biggest area of operating cost is electricity and I don’t see the light at the end of the tunnel. We want some kind of discussion and engagement with the regulator and the Jamaica Public Service (JPS) to address the charges, he added.

“If we cannot foresee or control the costs associated with one of the main drivers, such as power, then it is going to be really difficult to move as fast as is required,” he said.

Speaking to the areas of opportunity birthed from the pandemic, Kayumov pointed to ongoing discussions with Government and other private-sector interests “to build out a proper broadband fibre network across the island, connecting all the parishes”.

The ever-changing appetites of consumers for smart technology are also an element in the company’s plans “as areas where telecoms or Digicel can play a strategic role and be a catalyst, and to make that process happen across Jamaica.”

Despite the hiccups, Kayumov thinks Jamaica has more or less kept pace with technological advancements in the field.

Overall, “There is no other industry which changed itself as fast as telecoms. There is almost no other industry with this rapid change, we are [basically] dropping old technology every five years and coming up with new things, which, for Digicel, means continued investment,” he said.