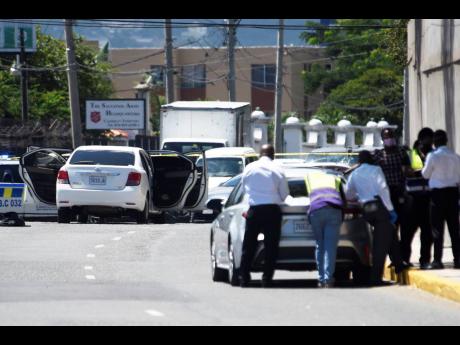 Nicholas Nunes/Photographer
Policemen huddle at the intersection of Hope, Waterloo, and Trafalgar - the scene of a firefight between law enforcers and the alleged killers of businessman Robert Fletcher on Monday. Fletcher was slain at his Travellers Rest Sports Bar minutes before his attackers were cornered by the police. 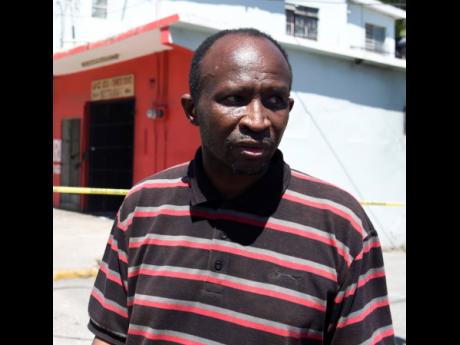 Nicholas Nunes/Photographer
Bruce Fletcher, older brother of Robert Fletcher who was robbed and killed at Travellers Rest Sports Bar in Swallowfield on Monday. 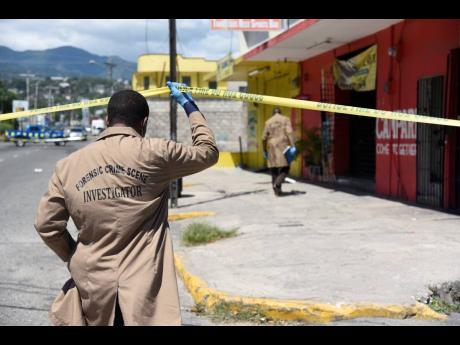 Nicholas Nunes/Photographer
A forensic investigator enters the crime scene where Robert Fletcher was slain at his sports bar on Monday. Cash and his licensed firearm were stolen.
1
2
3

A brother of the businessman who was gunned down at his Old Hope Road bar on Monday said that a history of violence has haunted the family, with Robert Fletcher being the third relative killed at the location.

The murder trail led the police to the accused killers on the fringes of the New Kingston business district, with frantic scenes of a firefight as motorists tried desperately to escape a traffic snarl.

Bruce Fletcher has also revealed that the family business, Travellers Rest Sports Bar, has been the victim of extortionists.

In 2011, Bruce lost another relative, Martin Fletcher, at the same location. Bruce’s father was also gunned down there in 1989.

Fletcher said he was concerned about the psychological state of his mother, who is in her 80s and was expected not to take another loss lightly.

“Him is her little baby that she grow him in her hand from him small, just like how me grow with her,” Bruce said of his late brother.

He said he was shocked at Monday’s deadly attack because the bar was being run for little or nothing, or in Bruce’s words, “a pittance”.

“Dem probably a target him tru dem see him a try. Dem send extortionist down here all the while fi torment him when dem want money,” Fletcher told The Gleaner.

Monday’s attack was not the first time gunmen struck at the bar. Bruce recounted that a few years ago, Robert was held at gunpoint and his motorcycle stolen.

“He just rent di spot and a try a thing. It did kinda hopeless still, but it keep dem hopes up. Maybe they thought business might get better,” Bruce said.

Robert Fletcher was shot about 12:30 p.m. by the assailants, who stole cash and his licensed firearm.

The fleeing attackers were cornered by the police at the busy intersection of Trafalgar, Hope, and Waterloo, trapping commuters in the midst of the gun battle.

The police said two gunmen were shot dead and a third taken into custody. Two firearms were seized.

Sleuths were able to track down the alleged killers through quick collaboration of the cops from the Emergency Communication Centre, who tapped the JamaicaEye CCTV system to deploy a response team.

The Independent Commission of Investigations has launched a probe.

Bruce said that he last saw Robert on Sunday after he took some groceries home for their sickly mother.

He has mixed emotions about the deaths and apprehension of the alleged killers.

“I am happy to know that they catch dem, but I rather if he was alive more than dead, though. I didn’t know when he died until I reach the hospital,” Bruce said.

Kari Douglas, councillor for the Trafalgar division, where the shootings occurred, told The Gleaner that she was aware of talk of extortion but could not verify if those claims were true.

“Personally, he did not complain to me. We heard of complaints that have been made otherwise and that he may be aware that an attempt like this was going to be made soon,” Douglas said.

Theorising that the killing of Fletcher was an “external job”, Douglas said that she had been reliably informed that the hit was not linked to feuds between rival factions of the Swallowfield community.