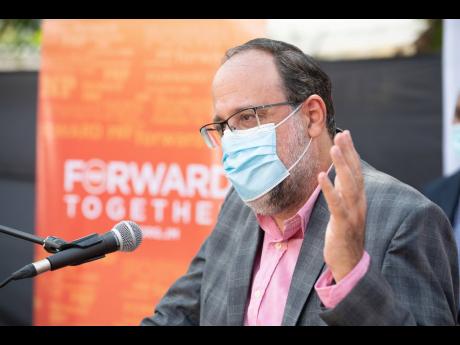 In his first public comment on the controversial endorsement of vigilante justice by Senator Lambert Brown, Opposition Leader Mark Golding has rejected that declaration but sought diplomatic cover by saying the People’s National Party (PNP)-aligned lawmaker was entitled to his personal opinions.

Brown, one of the most senior opposition senators, stirred outrage on April 23 when he vowed to go to the gallows if any attacker “violates” his daughter or any other female member of his family.

“So I don’t need a lawyer, once the jungle justice in the absence of the rule of law kicks in. I have held that view for many, many years,” he said then.

His elevation of jungle justice in one of the most murderous nations, per capita, on Earth has drawn condemnation by politicians and civil-society advocates alike.

Brown eventually withdrew the comments, but did not disavow the opinion.

Golding, an attorney-at-law and former minister of justice, said that the country’s justice system should be strengthened to increase public confidence “so they don’t have any kind of inclination or desire to take the law into their own hands”.

Golding, who was elevated to opposition leader and PNP president after Peter Phillips stepped aside in the wake of an electoral landslide last September, said that he would prefer that members not publicly profess views that contradicted the party’s policies.

But in an apparent attempt to soften the rap on Brown’s knuckles, Golding sought to frame Brown’s outburst as part of the cut and thrust of democracy.

“I think it is inevitable that it will occasionally arise and it is something which I think is part of running a democratic party and I think the alternative, which is to suppress freedom of speech, is far worse,” he said.

The addition of 18 junior shadow Cabinet members is expected to intensify the party’s advocacy, offering an incubator for the next generation of leaders for the PNP.

Among the appointees is PNP Youth Organisation President Krystal Tomlinson, who had been overlooked by Phillips for a senatorial position after she issued him a 30-day ultimatum to resign last September.

Golding said the appointment of the second-tier leadership was the fulfilment of a promise he had made during his presidential candidacy. He said that the second-string representatives would have some autonomy and he believes they will make the PNP more attractive to young people.

“It is expected that they will collaborate with the senior shadow Cabinet spokespersons, but not necessarily follow the same issues in terms of what they wish to speak on,” the opposition leader said.