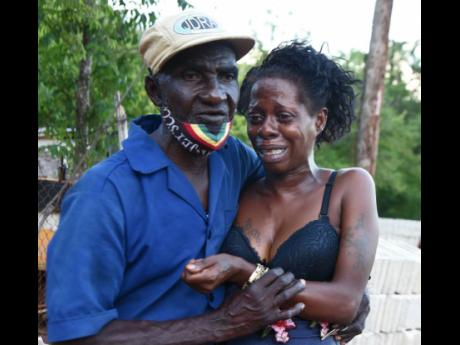 Kenyon Hemans/Photographer
Newton Fowler comforts his friend, Sashane Tulloch, as she mourns the loss of her daughter, Danesha Cooper, who passed away yesterday after being stabbed on the weekend in Kitson Town, St Catherine. 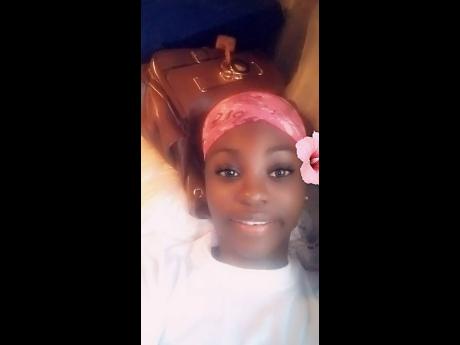 Andre Stewart, stepfather of Danesha Cooper – a 14-year-old Jonathan Grant High student, who died in the Kingston Public Hospital from stab wounds on Monday – said he had tried to prevent the relationship she had with her alleged 21-year-old killer.

“They had a relationship. Mi try fi stop it in all kind of way, but it was hard fi stop her,” Stewart told The Gleaner yesterday.

“The relationship kind a break up and since [that], him no steady – all a try to kill himself,” he continued.

Danesha was stabbed multiple times with a kitchen knife about 8 p.m. on Saturday in the Naseberry Grove section of Kitson Town, St Catherine, while reportedly returning from a shop not far from her house.

Reports are that the accused approached her from behind, covered her mouth, and stabbed her repeatedly before running off in nearby bushes with some residents in pursuit.

The injured teen was taken to the Spanish Town Hospital and later transferred to the Kingston Public Hospital, where she succumbed to her injuries yesterday morning.

“From the other day mi a try fi protect this little girl. I told her when she have to go to the shop, I will follow her. The one time she go a shop by herself, this happen,” said a grieving Stewart, adding that the accused had started to stalk Danesha.

“When I go to the hospital and look at her, mi never pray in a mi life yet, but Sunday night, mi pray because of what I see,” he told The Gleaner.

“The last thing she say to mi was ‘Daddy, mi feel like mi a go dead’, and mi tell her no she nah die. Then she say to her mother, ‘Mommy, mi can’t believe this happen to mi’,” Stewart disclosed.

The stepfather said the accused was so upset at his efforts to break up the relationship that he was suspected of setting fire to his house, a matter which was not reported as the community rallied to help him rebuild.

Danesha’s mother, Sashane Tulloch, was consumed by grief and could hardly utter a word as friends and relatives consoled her yesterday.

She denied that her daughter was in a relationship with the accused.

“She nuh in a no relationship. He want to be in one with her, but mi tell her to avoid him. She is everything to me,” she said.

“From she a grow, she say she want to turn soldier. Her father dead when she was four month in mi belly. Mi a wash, a mi and her. Mi a cook, a mi and her. Everything a mi and her,” the pregnant mother of three told The Gleaner.

The suspect’s father expressed shock at the turn of events.

“I really don’t know what happened. He is a good boy, who is humble and have manners to me. I taught him many skills so he can be a man,” he stated.

The father, who broke down while talking, said he had heard of the relationship, but did not try to talk his son out of it.

“He came in one night and was acting strange, and when I asked him what was the matter, he didn’t respond, so I took him to the hospital,” he said. “The doctor questioned him and I heard him say, ‘Mi want mi girl and if mi nuh get back mi girl, mi a go kill her and kill myself’.”

The dad admitted that he did not take him seriously, but the doctor recommended counselling.

He revealed that since the incident, he has received numerous death threats, but he intends to reach out to the bereaved family when the time is right.

The incidents come on the heels of a wave of violent domestic disputes, including the murder of a Trelawny woman between Saturday night and Sunday morning, allegedly at the hands of her common-law partner.