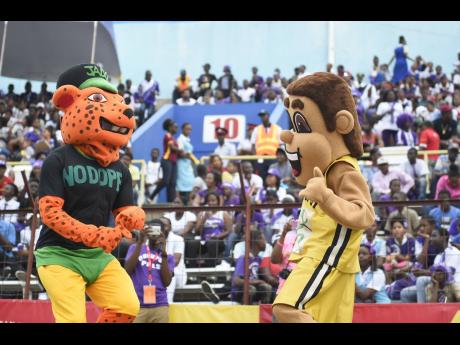 File
Mascots add to the entertainment of Boys and Girls Champs at the National Stadium in March 2018. There will be no spectators this year becaue of COVID-19.

As hundreds of athletes vie for medals in the first staging of Boys and Girls’ Champs in the COVID-19 era, mega businesses and small traders alike are already counting their losses from the empty stands that will ring hollow in the colosseum of emerging stars.

No fans will throng the May 11-15 event at the National Stadium and all participants must return a negative coronavirus test result for entry.

More than 7,000 travellers traditionally fly in for the annual championships. There are some 2,000 hotel rooms in Kingston and the majority, if not all, would be full during the five-day event, said Nicola Madden-Greig, director of sales for the Hendrickson Group of Companies.

Under her portfolio are three major New Kingston hotels – The Jamaica Pegasus, The Courtleigh, and The Knutsford Court.

Her neighbours at Spanish Court confirmed the fallout, with Sales Manager Joseph Perrin saying his hotel would have received pre- and post-bookings, as well as confirmed rooms during the three-day event.

In 2019, the best year for arrivals during the championships, Kingston experienced an increase of 33.3 per cent in visitors over 2018, a Jamaica Tourist Board event survey showed.

Diaspora groups of alumni from popular schools like Kingston College and Calabar, as well as Team Jamaica Bickle, would have flooded the city, with hundreds of members hosting pre- and post-fundraising events and scholarship presentations, pumping millions into their school’s coffers.

“We normally leverage the number of people coming in by hosting a panel presentation and awards ceremony at North Street for some 150 scholarship recipients,” KC’s alumni president of the New York chapter, Perry Bloomfield, told The Gleaner from his home in the US on Monday.

He said old boys from Canada and the US states of Florida and Georgia meet up in Kingston for a mass celebration.

“Easily hundreds of past students from across the globe converge on the city. Our group is at least 100 and, on average, we donate $1 million directly to the school, plus provide gifts such as laptops to the enhance technological strength of the institution.”

And although the absence of the Boys and Girls’ Champs last year did not stop their annual donation, the money usually made from merchandise has plummeted. During the event, Bloomfield estimates that about $500,000 is made on behalf of the track team. Those funds are channelled towards financing their participation in the Penn Relays in the US.

Team Jamaica Bickle normally brings between 20 and 30 members each year, purchasing only ISSA premium tickets, sponsoring a box at the stadium, and organising their own hospitality and catering.

“It’s a lot of economic activity; it is not just buying the tickets. We would have started our celebration from the Thursday night and do an after party or reception on the Monday,” Team Jamaica Bickle’s Irwine Clare told The Gleaner.

Donna Solan, vendor from Sandy Bay, Clarendon, has rented a room in Swallowfield for more than 35 years and earns income mainly from events held at the nearby National Stadium.

She took the risk of finding somewhere to stay as she set up shop last Friday.

Solan sold snacks and refreshments at the turnstile at Stadium East on Monday, as she was not allowed on the property – in compliance with Champs’ biosecure bubble against COVID-19.

“Me coming out here tomorrow (Tuesday) to see if me can set up out there same way, because the man dem still a go want something ... . Me just only wah know the police won’t stop mi,” said the 64-year-old.

Like Solan, vendors and taxi drivers in Cross Roads are feeling the brunt of the collapse of Champs fortunes.

Cabbie Odeon Beckford will miss out on countless trips from homebound spectators after days of revelry and cheering.

“It’s been teardrops over this,” he said.

Sharon Falconer, who has been supplying Champs crowds for 19 years, will be trying her luck with flags.

“Usually, mi nuh have hand fi sell dem,” she said, explaining that she would have had to purchase new stock three or four times per week.

Adjacent to her stall, Alicia Blake is still banking on making a buck from branded items like ties, hats, socks and scarves.

Blake will be waiting until Wednesday before she starts putting items on display.