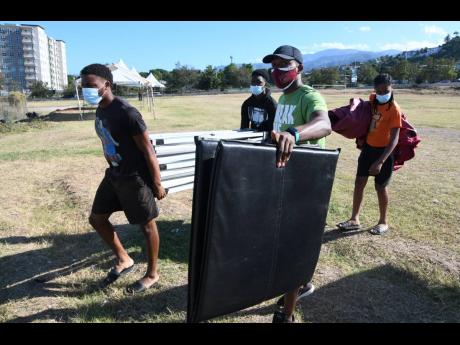 Rudolph Brown/Photographer
Team members of Herbert Morrison Technical High pack up equipment and prepare to leave the Stadium East field to participate in Day One action of the ISSA/GraceKenneday Boys and Girls’ Championships at the National Stadium in Kingston on Tuesday. 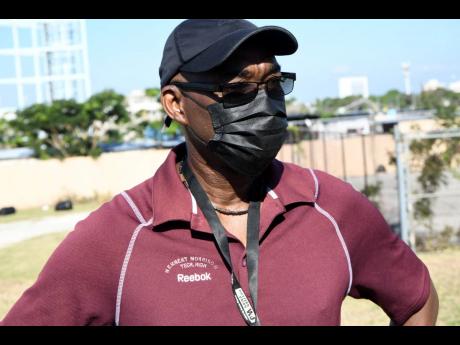 Daniella Anglin was sitting at the edge of her seat last March when Jamaica’s most popular track and field competition, the ISSA/GraceKennedy Boys and Girls’ Champs, was cancelled because of the pandemic.

The Herbert Morrison Technical High student was worried that the scrapping of Champs would destroy her chances of acquiring a scholarship to pursue her college education abroad.

This was a dream she realised after joining the high jump team on the advice of coach Claude Grant. Anglin said Grant encouraged her to perform well and exploit every opportunity to make things easier for her mother, a single parent.

The former netballer is certain she wants to get a college degree in psychology overseas because achieving that goal locally is a financial stretch.

“Without a scholarship, I think it would be a bit harder for my mother. She wouldn’t be able to afford it out of pocket,” said Anglin, who is the third of four children.

Being awarded a scholarship would make her the first in her family to go to university as her twin sisters went straight into the work world after high school.

The high jump bar holds more meaning for her than mere sporting achievement.

“Each time me go out and compete, it push me harder fi go in a school ... . And when mi mada see say the two a dem a work, it encourage she fi go harder beside me,” the 19-year-old told The Gleaner.

Luckily, Anglin, who has secured a medal every competitive year since grade seven except 2017, is being courted by university coaches. She has been in communication with at least three universities.

Nevertheless, Grant, who has been the track and field coach at Herbert Morrison Technical for 32 years, said it was important that she has her last hurrah.

The veteran coach is encouraging Anglin and other athletes not to lose sight of their goals and to push through to the finish line.

Anglin said she was more prepared in 2020 than for this year’s staging of Champs. She has been using a netball court near her home in Springfield district, close to John’s Hall in St James, and her bed to practise foundational jumps.

On Tuesday, she came second.

Of the 30 competitors from her school, Anglin was the only girl.

“I am grateful for the medal, but I don’t feel too proud about it because it’s my last year. I expected better,” the 13th-grader sighed.

But even as she frets whether her performance will jeopardise her college dreams, she comforted herself that supporters and her family would understand how badly the pandemic affected her training regimen.