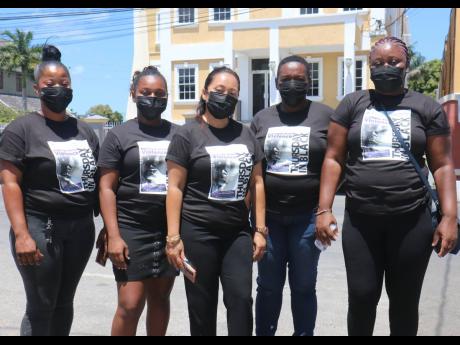 The umbrella group of municipal officials has been urged to lobby the Cabinet to speed up legislative reform to protect women and girls from abuse.

The call by Scean Barnswell, councillor for the Hayes division, comes in the wake of several acts of violence against women, including an assault scandal that has embroiled Westmoreland Central Member of Parliament George Wright.

Referencing Sharon Cole, the 61-year-old who was hacked to death in McDonald district, Crooked River, in the parish in February, as well as the April 6 viral video of a woman being pummeled with fists and a stool, Barnswell stressed that focus should be placed on vulnerable women and children.

Urging the woman battered with the stool to report the matter to the police again, Barnswell suggested that the police should follow through with victims to ensure they receive medical attention and press charges.

“I just want to say that she has support and if she should change her mind and thing, she should go forward and give her report,” said Barnswell.

The councillor made the comments at the Clarendon Municipal Corporation monthly meeting on Thursday.

Barnswell called for May Pen Mayor Winston Maragh, in his capacity as president of the Association of Local Government Authorities of Jamaica, to press the prime minister, national security minister, and local government minister to speed up pledges for tougher laws.

Wright has taken a leave of absence after an outraged public turned the screws on the first-time parliamentarian, who has been sidelined by the Jamaica Labour Party caucus on whose ticket he ran in the September 2020 general election.

The lawmaker and his partner, Tannisha Singh, both lodged complaints to the police about an April 6 brawl, but neither has confirmed or denied whether Wright was the aggressor captured on the video.

The police dropped the case because the footage was inconclusive.

But Barnswell, a former mayor of May Pen, believes that the police should “continue with their investigation and try to bring resolve to put that perpetrator behind bars, without just leaving it to the victim to carry on with their life”.

Radcliffe McDonald, councillor for the Toll Gate division, placed the blame squarely at the feet of some abused women. He said their indecisiveness in laying charges against the perpetrators spared offenders swift justice.

“The ladies them don’t turn up a court again, so the man them set free. A lot of this violence, the lady them come back and beg for the man, a cry for them, stating them not going court,” McDonald said.

Olivia Grange, the gender minister, has indicated that amendments would be made to the Domestic Violence Act to define aggression as not only physical, but also psychological, emotional and sexual.

Spanish Town Mayor Norman Scott, who chairs the corporation, also received a letter of advocacy from the protesters.

“After reading this letter and as one who have been personally affected by violence, I want to personally commend these ladies for their efforts to stem gender violence.

“It is a very good gesture, and men, women, and children must be included, as violence adversely affects us,” said Scott, who is a PNP councillor.

Karen Johnson, treasurer of the group, said that Jamaicans are still haunted by the grisly murder of 20-year-old Khanice Jackson in Portmore, St Catherine, in March.

“I have seen too many acts of violence taking place, especially against our females, and it is cruel,” said Johnson.