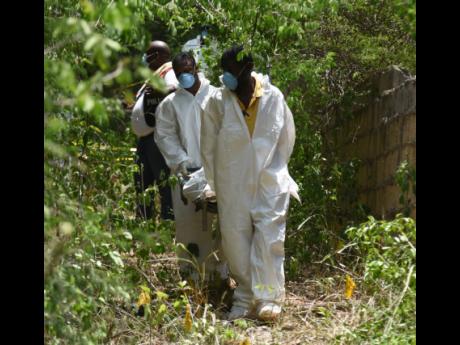 Kenyon Hemans
Personnel from the Sunset Funeral Home remove the body of a man from a shallow grave in Byles district near Kitson Town in St Catherine.

Claudette Whittle has been plunged into a state of distress after the exhumation yesterday of a body in a shallow grave in Kitson Town, St Catherine, which is believed to be that of her brother Lloyd Grant who went missing about a month ago.

“Is last month mi see him up a Top Mountain and him stop and talk to me and now this sadness. He was a very hard worker who sells roots and other items for a living, so I can’t see why anyone would want to kill him,” she said.

Whittle said that her brother was her best friend and she helped him to start a business sometime ago.

“I remember helping him to buy a bike and he started to sell mangoes. Him said, ‘Claudette mi sell off all the mangoes’, until him start to even export roots and bushes; it is really sad,’’ she recounted.

The 61-year-old was reported missing a month ago and there had been heightened concerns about his safety.

The Byles community of Kitson Town yesterday reacted with shock to the gruesome find.

“I just can’t believe that the killing is so close to home, trust me. This is where I cut feed for my animals, so I am frightened that dead body is over deh. The place is not safe,” said Melton Ward, a resident.

The police confirmed that the body had dreadlocks like that of Lloyd Grant, but was unable to give a positive identification as the body was in an advanced state of decomposition.

It was further revealed that the body had wounds to the neck and side.

An autopsy is to be done on the body.