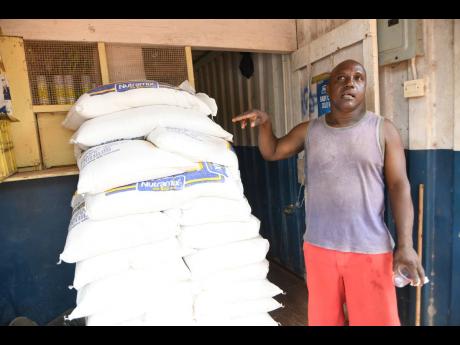 Rudolph Brown
Ramunn Hanson explains some of the challenges facing him as a businessman. Here he is seen pointing to Nutramix feeds he sells from a container in Kitson Town. 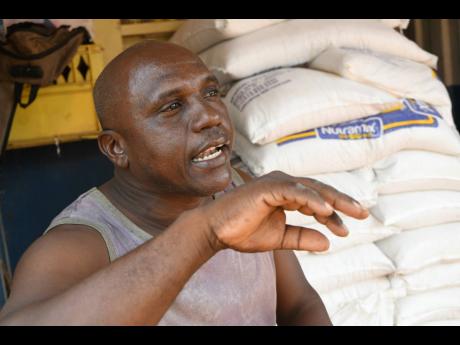 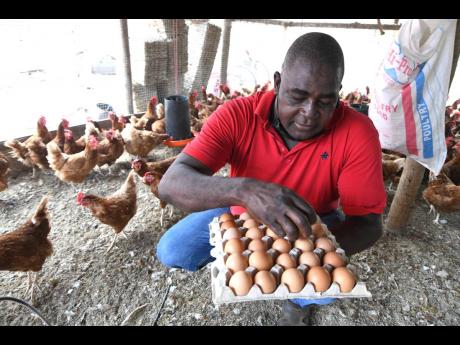 A few months ago, Ramunn Hanson was selling, on average, 80 bags of broiler crumble over three days from his small container in Kitson Town, St Catherine. However, on Thursday as he counted the 26 bags that still remained after last week’s purchase of 50 bags, he disclosed that he will soon have to close his shop.

The businessman, who gave up his full-time job as a taxi operator to start his small business in 2014, scrolled through his phone and showed us at least three messages that he received within the last five months from his main feed supplier announcing an increase. The last message was in May, at which time $130 was added to a bag of broiler crumble.

But while he hasn’t been spared, Hanson said that he has not been able to pass on the real cost of the products to small farmers in his community who depend on him. Like him, the majority of them are struggling to make ends meet as consumer spending decreases and cost of living increases.

“Man a bawl because right now them a say pork not going up, they can’t get any more money for the pork from the butchers,” he said.

Hanson sells a variety of feeds for pigs, chickens and layers, with the broiler crumble being his fastest moving product. As he counted the 26 bags which he relocated to the front of the shop in a bid to attract sales, he contemplated his next move.

“Mi a study say mi affi go back inna a taxi, or mi have to go sell the container now and buy a little truck and do removal,” he shared.

Hanson found it ironic that taxi operators are being asked to go without an increase for years despite the periodic increases in petrol, while those who distribute feeds locally seem to be raising their feeds every other month with every shift in cost on the world market. He feels they should be more considerate.

“Mi nuh go high school and mi don’t go to college enuh, but mi know little mathematics. Sometimes you can cut a little burden to help the customers them, things go a little faster and when you sell more things, you make more money,” he reasoned.

Owner of WT Feed, Wayne Thomas, said that while the price of feeds has been increasing, egg farmers have not been able to raise the price of eggs.

“Is not just the feed raise enuh, the baby birds for the meat price go up as well and the cost for the layer birds go up as well, so too have egg box, egg trays, medication, your light bill, petrol for the vehicle, to deliver the goods, everything goes up. So it’s just a mere margin for farmers, you barely can see your way through,” lamented the business owner, who has been operating the facility located in Kitson Town for the last 25 years.

He said that Hi-Pro Feeds has been subsidising the cost. Even so, a bag of chicken feed, which costs about $1,800 before the pandemic, is now being sold for about $2,200 now. About 20 bags are needed for 100 birds over a six-week period.

As the prices go up, wholesales and bakeries which are his primary clients have been purchasing less.

“We don’t know how long we can hold it like this,” said Thomas.

In addition to petrol and animal feed, the cost of flour has also increased. This follows an increase in February. The Jamaica Flour Mills said it was forced to increase the price of the common household staple by between eight and 11 per cent owing to an unprecedented increase in the cost of grain which has risen to more than 46 per cent and soy, more than 18 per cent. JF Mills also pointed to increases in oil prices as well as the slippage of the Jamaican dollar, as reasons for the increase.

Consumer advocate Michael Diamond said that the continued movement in basic commodities was of great concern.

“We have been dealing with COVID for over a year and certain things have been going up yes, but these types of increases have been coming more of a shock now. Based on the amount of increases, consumers are definitely worried about that,” he said.

“Ultimately for us as consumers, where do we turn?” he asked.

He declared that food bills are going up because the country is not producing enough to feed itself, and feels the Government should be doing more to protect consumers, like making more farmlands available.

“At this particular time when we are not really recovered economically, and again all of these increases, the consumer is the one basically flipping the bill and there should have been some level of protection for us,” he said.