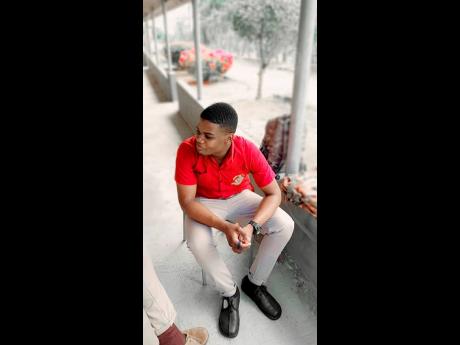 News of the sudden death 17-year-old Triston Graham, who collapsed in May Pen on Monday, sent shock waves through the school community of Lennon High School and rural Alexandria in Clarendon.

The family told The Gleaner that the teen had been diagnosed with a heart condition when he was about eight years old, but said that he had not fallen ill for almost a decade.

Delmar Douglas, Triston’s older brother, with whom he lived for the past three years, was brought to tears when he spoke of the relationship they shared.

Douglas, a lance corporal in the Jamaica Defence Force, described Triston as his best friend and said “he was the perfect gentleman and the perfect young man”.

Triston, who harboured dreams of becoming a soldier, was there to offer solace when Douglas’ military duties became overwhelming.

Douglas said the family’s grief was compounded by reports that no one rendered assistance to his sibling when he collapsed but opted to capture pictures and videos instead.

“They said he grabbed his chest and fell and said, ‘Help!’ and nobody was there to help him. Everybody a take pictures and a video before them assist my brother,” he bemoaned.

“I would never do that to a human being and I don’t know what’s happening to this country.”

The school’s guidance counsellor, Ainsworth Kelly, was overcome with emotion when he spoke with the news team.

Kelly said that he got reports that the teen was on the ground for 15-20 minutes before anyone picked him up to take him to the hospital.

Students, said the counsellor, called him on at least three occasions to complain that no one was offering help.

“I had to leave school, and on my way down, it is alleged that a taxi man had to be paid $500 before he rendered any assistance, and at a time when we are celebrating Child Month, when did we get here where a child can be on the ground suffering and adults just walk by?” a tearful Kelly asked.

Triston’s father, Maurice Graham, said he got the heartbreaking call sometime after 4 p.m. on Monday.

Graham said that Triston, the youngest of his four children, was a disciplined child of whom the family was proud.

Triston was scheduled to sit six Caribbean Secondary Education Certificate (CSEC) subjects in May and June.

His social studies teacher, Tanesha Bonnick, said he vowed to do well in the subject.

“He is always saying, ‘Miss, I’m going to pass your subject with either a grade one or grade two. When I saw the message [about his passing] on my phone, I had to sit down ... I couldn’t even speak,” said Bonnick.

Similar sentiments were enchoed by teacher librarian Lois Forsythe, who said Triston was humble and attentive.

Principal Frederick Lattray described the teen as disciplined and respectful.

“Triston was one of our most rounded students. He was a prominent member of our school band, played the bass guitar, keyboard and drum. He was also a member of the cadet and a home economics student,” said Lattray.