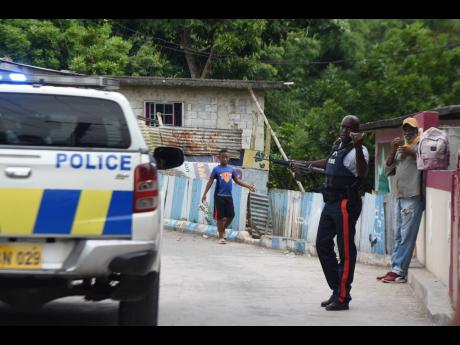 Kenyon Hemans/Photographer
Police officers keeping a keen eye on activities in the community of Fern Hill in Lawrence Tavern, St Andrew, yesterday after a family feud resulted in a retired cop being stabbed.

A retired policeman has been admitted to hospital after he was stabbed and beaten yesterday on the burial day for his deceased brother, Earl Lewis, reportedly over a growing dispute surrounding a minibus the latter operated.

Residents of Fern Hill district in Lawrence Tavern condemned as disgraceful the family brawl, which led to the use of a machete and shovel to inflict serious wounds.

“The bus never done pay for and the [loan] company come for it,” one resident said, pointing to the source of the squabble, which was corroborated by a sister of the former policeman.

She told The Gleaner: “Him (former cop) own the bus, but the deceased used to work at On Time. He was the driver of the bus. He is away and hear say we bredda dead. You give me the bus to operate and yuh deh foreign and hear say yuh bredda dead. What you going to do? Come and claim yuh things. Hate dem a carry for the bus.”

The sister said that the bus was repossessed shortly after Lewis' April 2 death, adding that tension had been brewing before yesterday.

“He is admitted. He cannot walk, and he is feeling lots of pain. The doctor said he is not to eat anything. They are going to do more tests and X-ray,” she said of her brother's condition as she returned from the hospital, adding that he got injuries to the head and side.

She said that her brother had been taking a picture of the deceased's house when a family member yelled at him and another ran out and attacked him.

Lewis, who reportedly died of natural causes, was buried at the Meadowrest Memorial Gardens.

“Everybody a call bout the attack, so we nuh bother go funeral because him deh deh so. We affi pay attention to the one weh deh pon him back … . This is so shameful and disgraceful,” the shaken sister added.

The police had to be called to the community after the burial as the tension was still high, with talks of continued infighting.

The Lawrence Tavern police are probing the stabbing incident.

The warning came against the backdrop of the shocking murder of banker Andrea Lowe-Garwood inside a church in Falmouth, Trelawny, on January 31.

The police have indicated that their investigation has since shown that the killing stemmed from a family dispute.

The commissioner said some family members have turned to “arranging and premeditating” their killings over property, wealth, or other items.

“So if the property that you think you're going to benefit from by organising the assassination of family members or persons close to you, or doing it yourself that you think that you do this and you enjoy the fruits of that, it is very unlikely,” he warned.