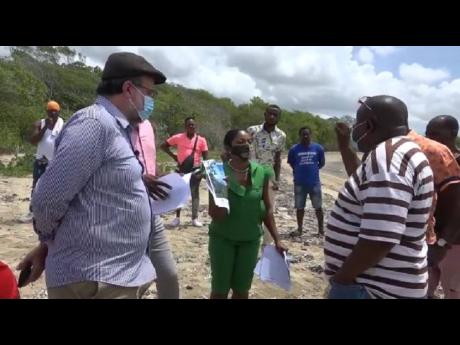 Tempers flared in Old Pera, St Thomas, yesterday as residents defended what they described as their right to utilise the disputed island, which was reportedly captured by leisure entrepreneurs who set up a camp site that generated revenue for the...

Tempers flared in Old Pera, St Thomas, yesterday as residents defended what they described as their right to utilise the disputed island, which was reportedly captured by leisure entrepreneurs who set up a camp site that generated revenue for the citizens in the area.

The operation was recently shut down by retired parliamentarian Pearnel Charles Sr, who told The Gleaner that he is the owner of the land. He also erected signs to indicate that it was private property.

A team, led by Opposition Leader Mark Golding, visited the area yesterday upon request by community members, who say they are being deprived access to the beach and land.

An island off the coast, which is easily accessible because the water is shallow, Old Pera has been used as a camp site for an eco-friendly operation, where persons from the local community were making a good living cooking and supplying beverages and other services needed by the campers.

According to Golding, the beach is also along a route used by fishermen, and the community has, for generations, accessed the beach from the parish council’s land.

“So the signs suggest that the community shouldn’t be able to access the beach … . That is not right because they had generational access and they should be allowed to access it and enjoy life,” he said.

Golding accused St Thomas Eastern Member of Parliament Dr Michelle Charles, who later showed up, of being in a compromising role as representative of the people as Charles Sr is her father, charging that she “seemed to have sided with her family’s commercial interest. That’s a conflict, and her role as MP has been compromised if that’s the position she took”.

Golding suggested that the public defender should have look into the matter to preserve the community’s rights.

That idea was supported by businessman Cordinal Beckford, an activist of the Golding-led People’s National Party, who shared that he was born and raised in the area.

“This island belongs to the people of Old Pera. It is not owned by Mr Charles. This is not part of the legacy he left when he was MP in the ‘80s. That island is ours. We have been using it, pre-dating my father, who was born in 1927,” he said, adding that they had not seen any paperwork to verify Charles Sr’s ownership.

As harsh words aimed at the MP pierced the atmosphere, Michelle Charles told reporters that the land and the beach were still open to community members.

“It’s all politics. The property of Pera – the section that is owned by my father and mother – has never been closed off to anybody, and everybody knows that. The problem that they are trying to make is a political problem,” she said.

“There’s a gentleman that came from England that had a camping event. He and I speak on a regular basis. The camping event was not stopped. He was leaving to go back to England. What was stopped was him digging a pit where faeces was coming into the water,” she added. “He had no permission neither from us, the National Environmental and Planning Agency or anybody in Jamaica.”

Charles noted that the no-access signs were erected to ward off arsonists who have destroyed over 500 acres of sugar cane belonging to her father.

“I heard that the leader of the PNP and the party’s chairman were coming to eastern St Thomas, so I took the time out to welcome them and introduce them to all the Ministry of Tourism has planned. We are a diamond in the rough, and we have so much planned,” she added. “The reality is it is very easy for someone to look up who owns what property.”