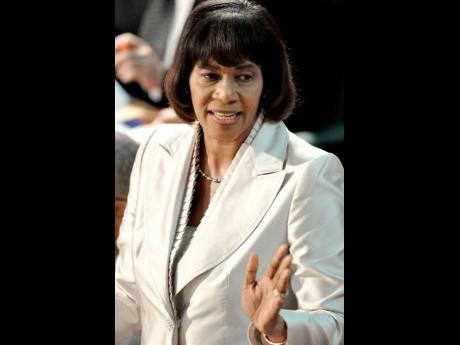 File
The Trafigura saga dates back to the prime ministership of Portia Simpson Miller.

A court date has been set in the Supreme Court for the resumption of the much-anticipated Trafigura Beheer matter involving former Prime Minister Portia Simpson Miller and four other members of the People’s National Party (PNP).

The quintet is to testify in open court about a $31-million ‘donation’ given to the political organisation by the Dutch oil trader in 2006.

Following the Privy Council’s ruling in April that the five party functionaries are to testify in open court, Director of Public Prosecutions Paula Llewellyn had written to the registrar at the Supreme Court requesting a court date for the matter to continue.

Consequently, checks made with the Court Administration Division on Thursday revealed that a date has been set, but The Gleaner was informed that the specific timeline could not be disclosed as the parties have not yet been notified.

Llewellyn, when contacted, said she is yet to be formally notified and is awaiting the letter.

The Office of the Director of Public Prosecutions is Jamaica’s designated Central Authority under the Mutual Assistance (Criminal Matters) Act (MACMA) to which the quintet is subject.

The PNP officials have, for more than a decade, been fighting a Supreme Court order for them to publicly answer questions about the donation that the party collected under the leadership of the then Simpson Miller administration, which had an oil-lifting agreement with Trafigura.

Dutch firms, however, are prohibited from making donations to foreign governments.

The quintet had maintained that they had no information to assist the Dutch investigators and also that the local judges had erred in their ruling compelling them to testify. They also argued that the Supreme Court judges had no power to compel persons to give evidence in court or to impose a penalty upon refusal.

The Trafigura matter originated from a series of requests from authorities in The Netherlands for Simpson Miller and the others to answer questions about the money that was sent to the party while Trafigura had an oil-lifting agreement with the Jamaican Government.

The political donation transgressed Dutch law but did not breach local legislation.

After public outrage, the PNP said that it had returned the money.

According to the facts presented before the Privy Council, the National Public Prosecutor’s Office (NPPO) of The Netherlands is investigating alleged breaches of the Dutch Criminal Code by Trafigura Beheer for the potential bribery of public officials of Jamaica.