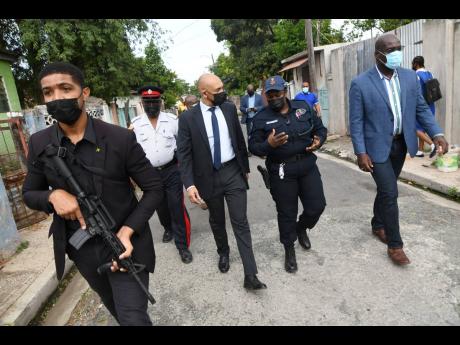 Rudolph Brown
Major General Antony Anderson (centre), commissioner of police, chats with Superintendent Tommie-Lee Chambers, (second right) and Fitz Bailey, (right) deputy commissioner of police in charge of crime during a tour in Flanklyn Town yesterday after an attack on the police station overnight on Friday.

A manhunt is underway to locate a group of men who opened gunfire on the makeshift Franklyn Town Police Station located at Cumberland Avenue in Kingston East, Thursday night.

The police believe this was an act of reprisal for a fatal shooting in the area hours before.

The police said officers were forced to defend themselves when the station came under heavy gunfire.

“The police took them on but so far we have not held anyone”, Senior Superintendent of Police and acting area commander for east Kingston, Steve McGregor told The Gleaner yesterday.

“There was a fatal shooting (Thursday) in the day where a man was shot by the police and firearm recovered. We are appreciating that this was a reprisal to that because of some intelligence that we have as to the people who are responsible for same,” McGregor said.

The deceased has been identified as 19-year-old Tyrese Haye, otherwise called ‘Lesa’.

Reports are that he was killed by the police during an alleged confrontation.

The Independent Commission of Investigations (INDECOM) has since launched a probe into the incident, as residents have refuted police claims.

Yesterday, McGregor urged residents of the community to have dialogue with the police on the matter.

“This is an area that I grew up in. In fact, this street (Cambridge Street) I used to live here and this is not how the people of Franklyn Town normally behave. I am appealing to them, anybody who knows anything call 119 or a police officer that they confide in. I am available 876-322-7548 so that we can deal with this,” he said.

McGregor said the Commissioner of Police Major General Antony Anderson was on hand to give moral support and encourage the police officers during a walk-through on Friday.

The police say an operational response to the station shooting was warranted.

“As we speak, we are going after the people that we think carried out this act. We are going to have a curfew in the space starting tonight for the entire weekend into Monday,” McGregor told The Gleaner.

“The police come and kill the youth innocent. Why dem never carry him in? Dem come and see four of dem and run weh three. Dem kill the youth cold blood and different man attack the station and dem a say a we down here dweet,” a resident said.

INDECOM in a release yesterday said 12 persons have been shot and killed by the police so far in May.

“The police have reported that at approximately 4:10 p.m., three officers were on foot patrol in the community. During the patrol, a group of men allegedly ran upon seeing the police. One of the men was accosted and during a tussle. It is reported, that he pulled a firearm, resulting in an officer shooting the man. The injured man was taken to the Kingston Public Hospital where he was pronounced dead,” INDECOM said of the report received from the police.

The police oversight body also said a silver and black 9mm Ruger pistol with a serial number was reportedly retrieved at the scene of the incident.