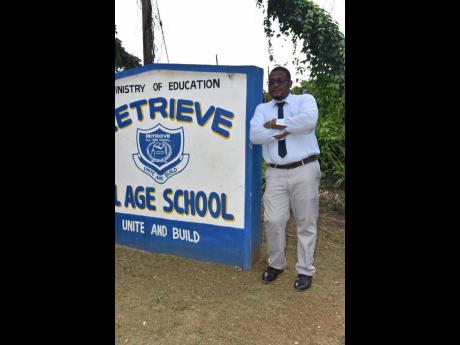 Photo by Mark Titus
Garth Herron, principal of Retrieve All-Age School, located just to the west of the St James border in Westmoreland.

Garth Herron, principal of Retrieve All-Age, has vowed to be a counterforce, doing all in his power to pull all the males in his school away from the lure of gangs and a lifestyle of crime.

The multi-grade educational institution was oftentimes caught in the middle of a vicious gang warfare that spanned several communities near the borders of St James, St Elizabeth and Westmoreland, involving the now-deceased gangster Ryan ‘Ratty’ Peterkin and his one-time second in command, Delano ‘Prekeh’ Wilmot, who mercilessly left a bloody trail of death in their wake wherever they went, forcing residents of Retrieve, which is located on the border of St James and Westmoreland, to send their children to school selectively.

However, Herron is determined to change the narrative in the lives of these students, especially the boys, and will be introducing several programmes, including the Boy Scouts Movement, as soon as school is back in full operation.

“We want to introduce the Boy Scouts programme because we think that it’s a very influential programme in the lives of young boys, and as the saying goes, ‘Once a Scout, always a Scout’,” Herron told The Sunday Gleaner.

He said a Scout is someone who will help and give their best to make sure that those in need can be assisted, and will serve as an important pillar to transform the minds of the members of the school community who have suffered years of traumatic and violent incidents.

“In this context, the Boy Scout programme, to us, is very important in this community and in our school to uplift our boys in helping them to appropriately identify positive role models,” Herron said. “We want to have our boys thinking like that so that they can help to build their communities.”

According to the educator, the violence in recent years has impacted the school attendance drastically and has forced people to flee the area or take cover in their homes, but in recent times, the enrolment figures are climbing again.

“Our numbers went down because of the crime and violence,” he explains. “We were about 35 last year. Now, we are at 42, consisting of 28 boys, so we are seeing a slight increase and we are expecting to get a bigger number come September.”

He expects the growth to come from a campaign that he intends to execute while being mindful of the ongoing COVID-19 pandemic.

“We want to see positive role models for our boys. We want to see positive men who are going to teach them how to come into society and do something positive, instead of becoming a nuisance,” Herron stressed, adding that the Scouts programme would form part of a wider mentorship initiative to influence behaviour change.