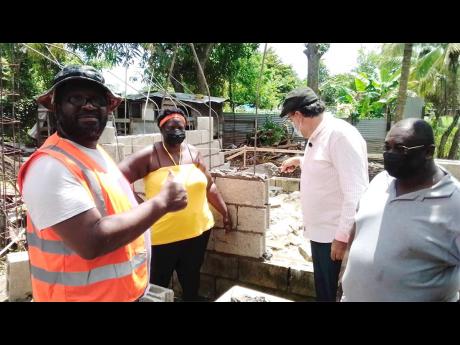 Photo by Hopeton Bucknor
President of the People’s National Party, Mark Golding (right), speaks with Davian Hopwood, recipient of an under-construction home in Petersfield, Westmoreland, at a ceremony on Saturday. Also in the photo are councillor for the Petersfield Division, Patrick Forrester (right), and contractor Martel Noble.

As Davian Hopwood watched People’s National Party (PNP) President Mark Golding laying a block for under-construction home in Petersfield, Westmoreland, on Saturday, she beamed with happiness at the fulfilment of a months-long political pledge.

Hopwood, a hairdresser and mother of five, was the first recipient of a home under the O.T. Fairclough Trust Fund as part of a slew of promises made by Golding in his campaign for the leadership of the party last summer.

Hopwood said she has been a dedicated worker with the PNP since 1997 and was enthused that her perseverance was now paying off.

“Mark Golding is the one who makes this possible for me and I thank him very much,” Hopwood told The Gleaner on Saturday.

“The house that we now occupy is kind of small, so this house comes as a blessing in disguise for me and the entire family.”

The fund was named after PNP’s founding father, Osmond Theodore Fairclough, in recognition of his distinguished contribution to the party and country at large.

“In his honour, I committed to establish a trust fund that would support party workers who are in need of help, and we have set it up with a governance structure, found trustees who are custodians of the resources, and then a grants board drawn from each of the regions and the women’s movement of the party, who then makes the recommendation for who should be assisted,” said Golding at a groundbreaking ceremony on Saturday.

“Today is the first project, and it is fitting that we are doing it in the parish of Westmoreland because O.T. Fairclough was from Bethel Town in Westmoreland.”

Martel Noble, the contractor for the project, said that he volunteered to spearhead the initiative, free of cost, as a favour on behalf of Petersfield Councillor Patrick Forrester.

“This is a good move for the PNP because it is not often that you see a political party coming together and donating a home to anyone, which is not funded through politics,” Noble stated.

The house will include a 16x12 bedrooom, a bathroom, a kitchen, and a veranda.

The project is expected to be completed over the next two weeks.