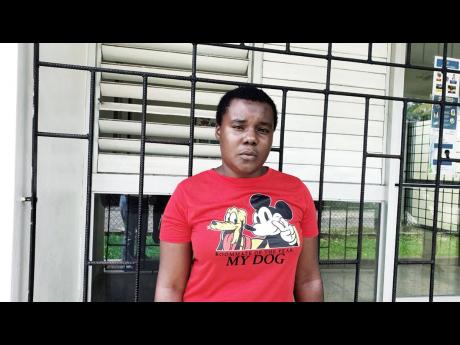 Photo by Janet Silvera
Stephina Ralston outside the Trelawny Parish Court in Clark’s Town on Monday.

WESTERN BUREAU: A 23-year-old Warsop, Trelawny, woman who was viciously stabbed in April is now begging the courts to drop the case against her alleged attacker, an ex-boyfriend. Stephina Ralston appeared at the Trelawny Parish Court in Clark’s...

A 23-year-old Warsop, Trelawny, woman who was viciously stabbed in April is now begging the courts to drop the case against her alleged attacker, an ex-boyfriend.

Stephina Ralston appeared at the Trelawny Parish Court in Clark’s Town on Monday, six weeks after the attack, determined to free 34-year-old Anthony ‘Israel’ Bailey, for whom she says she is pregnant.

However, she was advised that such a request can only be dropped by the circuit court.

Her reason for wanting to free the man who reportedly butchered her was based on plans he has to send her back to school to further her education and her six-week pregnancy, she told The Gleaner.

It would appear that Ralston was already pregnant when Bailey reportedly used a kitchen knife to inflict wounds to Ralston’s shoulder, arm and abdomen, causing her intestines to protrude. She was admitted to the Percy Junor Hospital in Spaldings, where doctors saved her life.

On Monday, as Bailey was remanded in custody, after his April 26 arrest and charge for attempted murder, Ralston stood outside the courthouse encouraging other women to learn to forgive.

“Everybody deserves a chance,” she stated, unafraid to go back and cohabitate with the man she told The Gleaner in April treated her like a slave.

“I am living in a free, democratic country and I am living like a slave! It’s not right. I am expecting him to come back again ... . Everywhere I go, this man finds me, so I cannot be a citizen in Jamaica,” she said then.

Convinced he will not abuse her anymore, although he has a history of beating her, Ralston said it won’t be the same this time around.

“I am not gonna be in the case (situation) where he will do it again,” she stated with conviction.

Refusing to rehash the April 15 incident, which saw her hospitalised for one week, Ralston brushed it off as unimportant. She was also not concerned that she had betrayed the multitude of women being abused in the country.

Instead, she said she had words of encouragement for country’s women, “They are to give their men a chance, even if they are abused”.

Ralston expects to go to the circuit court on June 9 to plead for her ex. It is more than likely he will be released, owing to the fact that if there is no complainant, there is no case.