Councillor: St Thomas community could be washed away 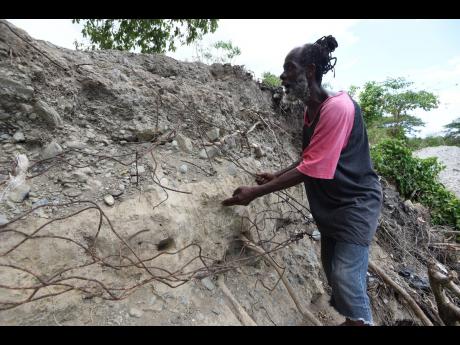 Ian Allen/Photographer
Patrick Roberts, resident of Riverside Drive in Seaforth, St Thomas, shows what is left of the gabion basket that is used to prevent the Negro River from overflowing its banks. 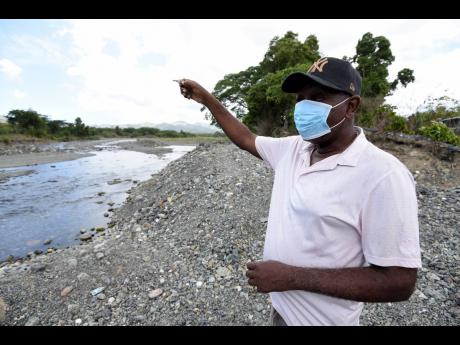 Ian Allen/Photographer
Gauntlet Stewart, a resident of Seaforth Gardens in St Thomas, explains how high the level of the Negro River rose the last time the community got flooded.
1
2

Residents of Seaforth in St Thomas are appealing to the authorities to action promises of river-training works to be carried out at the Johnson and Negro rivers in the parish.

They fear that if this is not done immediately, then the 2021 hurricane season – which begins today – could bring woes and death if it ushers in anything like the heavy rains experienced last November.

“I’ve been living here for approximately seven years, but I’ve been planting in the area from long before, and last rainy season was the hardest devastation I’ve seen. All of the trees you see down the river were right here. If Father (God) never draw him hand on the rain, you wouldn’t come see anything here,” said Patrick Roberts, who lives at Riverside Drive in Seaforth.

He believes that another hour of showers would have claimed lives in the area.

With his home directly overlooking the river, Roberts, who admitted to living in one of the many informal settling in the area, appealed to the Government for help.

He told The Gleaner that it was said that there was no money for river training as the area was not designated for settlement.

“Not because we ‘round here not paying any lease or because a capture land we live pon, but we are people, human beings like anybody else, and we would want to see something good happen for the community,” Roberts insisted.

No stranger to floods

Gauntlett Stewart, who lives in the Seaforth Gardens Housing Scheme, shares the same fears as Roberts.

Though he admitted that he wasn’t directly affected during the last few rainy seasons, Stewart revealed he is no stranger to what the river can do.

“In the 90s, I had to put my little son on my head to go through the water that was flooding out my home, so I would very much want to see something done to prevent that from happening again. We were so lucky then that there was no loss of life, but maybe this time, life could be lost and I’m appealing to the authorities to do something about this river now before something happen,” Stewart said.

“There are people who are immediately threatened, so something has to be done before we start to light white candle put all over the place seh we sorry,” he said.

The US-based National Oceanic and Atmospheric Administration has predicted between 13 and 20 named storms for the current hurricane season.

“The situation with the river is of great concern. Last October, we had heavy rain and there is nothing on the side of the bank to hold the river, so we are expecting that if another rain like that comes, the whole community will be washed away,” Spencer said. “The member of parliament and National Works Agency came and saw the situation and I understand that it was planned in the Budget but no work has begun as yet.”

She is also calling on the Mines and Geology Division in the Ministry of Transport and Mining to address miners in the area, who she accused breaching the river’s embankment.

“There are several breaches, from straight up the river come right down. They just go in the riverbed, take out the sand and they just leave it like that. Sometimes you have others going in and sieving the sand, then you see stones pack up everywhere. The river doesn’t have a proper channel to travel and that’s causing problems,” the councillor said.

She said that she has raised the matter at the St Thomas Municipal Corporation, but letters to Mines and Geology Division have gone unanswered.