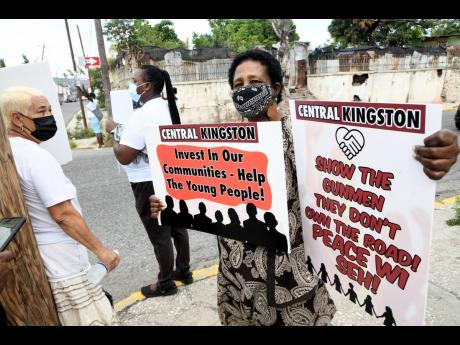 Rudolph Brown/Photographer
Jennifer Newman, councillor caretaker of the Rae Town division in Kingston Central, protests against gun violence in the constituency on Tuesday. 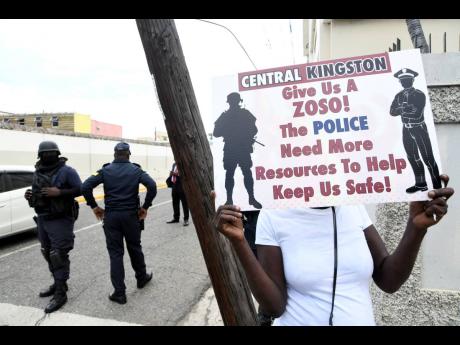 Rudolph Brown/Photographer
Policemen patrol the intersection of East and Beeston streets in Kingston where a small band of protesters gathered on Tuesday.
1
2

Tameka Ellis broke down in tears as she recalled how her mother had not laid eyes on her brother, Towan Ellis, for more than seven years.

But she will never see him alive again.

Towan Ellis, alias ‘Hothead’, was fatally shot by three masked men who pounced on him and others who were outside a gambling shop on Fleet Street, Kingston, on Sunday about 3:45 a.m. – more than an hour before the nightly curfew was scheduled to expire.

The 37-year-old is the latest victim of a murder wave that has rocked the Kingston Central Police Division, which has experienced a surge of more than 30 per cent in shootings and killings in 2021.

When Tameka Ellis heard the shots ring out Sunday morning, she took up her cell phone, fearing the worst.

Ellis’ gun murder – one of nearly three dozen in Kingston Central since January – prompted several women scarred by trauma to mount a small protest on East Street in a symbolic stand against the violence.

Among the group was People’s National Party councillor caretaker Jennifer Newman of the Rae Town division.

She is lobbying that Kingston Central be declared a zone of special operations (ZOSO) – advocacy that is in sync with PNP caretaker for the constituency, Imani Duncan-Price.

Newman said that the communities were weary of the bloodletting in the constituency, including the weekend double murder of a mother and child on Elletson Road. The spiral has been endless, said Newman.

“Having lost so many lives in the last couple of months, we know that the police have been working the best they can with limited resources,” she told The Gleaner.

“We are asking the Government that Central Kingston be declared a ZOSO in an effort to stem the level of violence that is taking place.”

“Up to now, we don’t hear the MP come and speak out a statement of condemnation to say this need to stop or anything. We are the only ones who have been calling to say we need peace and return to normalcy,” Newman said.

The councillor caretaker is also calling for the Government to increase police resources in the war against violent crime. She referenced the gun attack on the Franklyn Town Police Station as an example of the firepower and brazenness of the underworld.

One of Tuesday protesters, a victim of crime, stood at the corner of Beeston and East streets with a bullet still lodged inside of her weeks after an attack that was fatal for others.

Meanwhile, the pain from Towan Ellis’ death is still fresh for his family.

Tameka, his sister, told The Gleaner that she was still puzzled about why anyone would hurt her brother, a handyman since his 2008 release from prison where he spent seven and a half years.

Their blind mother, who resides in the US, is sickly and had not been told of her son’s demise up to press time.

“We live inna one house. We don’t have a motive for his thing. Him is not a person weh involved and fi see him just dead so.”