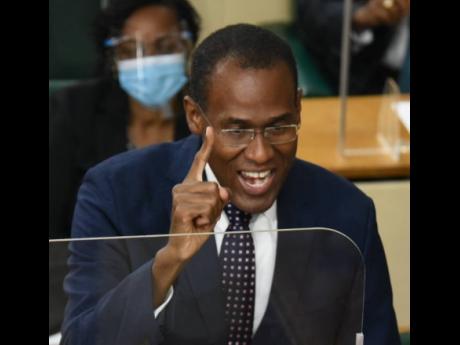 Persons 60 years and older who have been fully vaccinated can apply for a $10,000 grant from the Government, Finance and the Public Service Minister Dr Nigel Clarke announced in Parliament on Tuesday.

The initiative takes effect on July 15.

But the revelation by Clarke that, at present, 7,052, or only two per cent, of the 350,000 Jamaicans 60 years and older have been inoculated against COVID-19 has laid bare the failure of authorities to convince the elderly about vaccine safety.

Jamaica is targeting the immunisation of 1.9 million people to achieve herd immunity by March 2022, but the near-three-month-old campaign has only captured around seven per cent of the population, the majority of whom have received a single dose of the double-jab Oxford-AstraZeneca.

Clarke said that a vaccinated person applying for the incentive should provide his tax registration number, mobile number, date of birth, first and last name, and an email address, if available.

He urged fellow members of parliament to encourage their elderly constituents to sign up for the incentive.

The income qualification of persons earning $1.5 million or less has been removed for accessing the benefit.

“This pandemic does not end in Jamaica until a large majority of persons in the over-60 population are vaccinated,” he said.

Clarke said that it was in the public interest that this segment of the population who were vulnerable to COVID-19 should be fully vaccinated.

He said that only 0.1 per cent of persons 60 years and under who contracted COVID-19 have died.

“Those over 60 constitute eight per cent, or one in 12 died after contracting the virus,” he added.