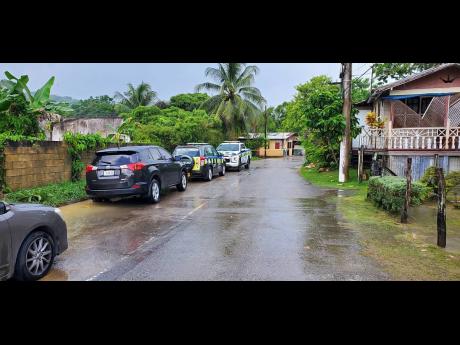 Photo by Adrian Frater
The calm after the storm. Police vehicles lining the roadway outside the bar in Logwood, Hanover, where yesterday’s fatal shooting took place.

After a lull in violence in recent times, guns barked in Logwood, Hanover, yesterday, leaving two men dead and two others injured in a brazen mid-morning attack.

According to police reports, about 11:00 a.m., heavy gunfire was heard inside the community and lasted for several minutes, causing panicking residents to seek cover.

When the shooting ended, 39-year-old bar operator Kevon Roosevelt, of a Dam Road address in the community, and 16-year-old Rodray Martinez, of Orange Bay in Hanover, were found to have been shot, along with two other persons.

“When the police got there, the body of bartender was seen inside his business place,” said Superintendent Sharon Beeput, the commander for the Hanover Police Division. “We were also told that other persons were injured and had been transfer to the Noel Holmes Hospital in Lucea.”

According to Beeput, when the police went to the hospital, they were told that Martinez had died and that the other two persons, whose injuries were not considered life-threatening, were being treated.

While noting that the community was now tense after the shooting, Beeput said the police were not able to ascertain a motive.

However, a resident of the community told The Gleaner that despite the calm in recent times, it was only a matter of time before the wanton shooting began in the community again as many youngsters are holders of illegal firearms, echoing concerns residents expressed to our news team last week and reported in The Sunday Gleaner.

“We have too many idle youths around with guns who are not afraid to kill people,” the resident, who asked not to be identified, told The Gleaner yesterday. “My fear is that now that the shooting has started again, we will be in for more murders in the community.”

However, cognizant of the tension and the possibility of reprisals, Beeput said round-the-clock security will remain in and around the area over upcoming days.

“We will be putting a police-military team on the ground there to maintain the peace,” said Beeput. “We will also be pursuing all possible leads to get to the persons behind this shooting.”

Logwood, a deep rural community in the western section of Hanover, gained much notoriety back in October 2015 when a group of heavily armed gangsters stormed a home in the community, killing six family members and burning their house to the ground.

In 2018, Mikhail ‘Troy’ Campbell and Errol ‘Scorcher’ Clarke were convicted in the Home Circuit for killing of the six family members and arson and were sentenced to life in prison.