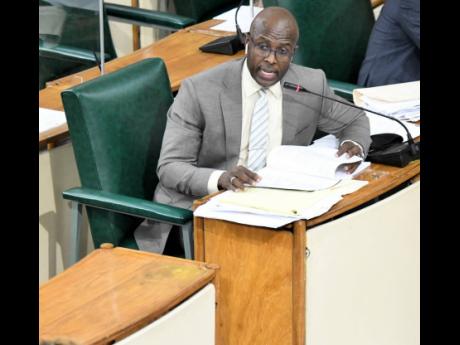 The Rural Agricultural Development Authority (RADA) came under fire from a parliamentary committee on Tuesday for issuing a report that lacked data and analysis of the scale of devastation to Jamaica’s farm sector from the coronavirus pandemic and late-year hurricanes in 2020.

The double blow has had a withering effect on life and consumption patterns in an economy that has not recovered from the downturn in commerce.

The economy contracted by an estimated 5.7 per cent in the January to March 2021 quarter compared with the corresponding quarter of 2020.

Agriculture suffered the worst for the goods-producing sector, slipping 2.0 per cent in the March quarter, data from the Planning Institute of Jamaica show.

Government member Dwight Sibblies questioned the reliability of the document because it lacked quantitative details on the devastation.

“I am not seeing any report (showing) where we are coming from or what is the fallout. I am not seeing numbers ... . I was expecting more numbers than verbiage,” Sibblies, member of parliament for Clarendon Northern, said on Tuesday during a sitting of the Public Administration and Appropriations Committee (PAAC) of Parliament.

Sibblies said that the inadequacy of the report was a handicap to him and other members of the PAAC who sought to probe the effects of COVID and the floods.

“Now that you have implemented certain things, what are the plans to close the gap? Or is it that we not going to close the gap, but we are going to do X, an alternative. That’s what I was looking for, for the most part.”

Dermon Spence, permanent secretary in the Ministry of Agriculture and Fisheries, offered to provide the requested information at a later date.

“If you would like to see economic analysis of the impact on the varying sectors and how the countermeasures would have filled those gaps, then we can do that because we have those figures,” said Spence.

Agriculture Minister Floyd Green gave preliminary estimates of around $2.4 billion of damage to the farms after hurricanes Eta and Zeta pelted the island with driving rain. Eastern sections of the country were worst hit.

Lockdowns, curfews, and other restrictions choked market demand, with the fallout from the hotel sector proving particularly punishing, with inbound passengers barred for more than two months in the spring of 2020.

“Now, these activities or issues were further compounded by the adverse weather conditions on the agriculture sector – periods of drought followed by excessive rainfall. One would recall the combined effects of Eta and Zeta, and so the ultimate impact on the country’s food security, rural development, and economic growth was felt,” Spence told the PAAC.

But committee Chair Mikael Phillips questioned the success of some of RADA’s countermeasures, citing what he deemed to be defects in the policy incentive programme.

“I see you giving incentive when we have even drought. So you giving seed and fertiliser, but there is still no water for them, and we still don’t get nuh water,” said Phillips.

However, Spence countered that the pandemic was unprecedented and that some programmes were designed and implemented long before COVID-19 reached Jamaica’s shores.