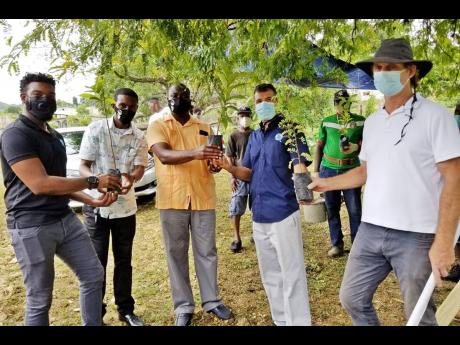 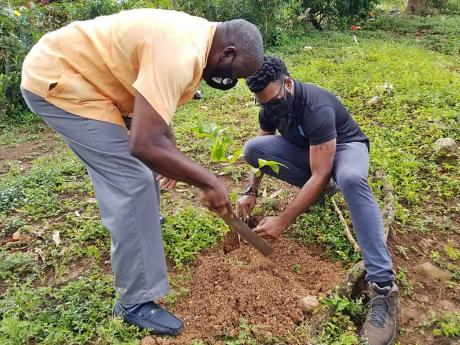 Contributed
Councillor for the Beecher Town Division in St Ann, Ian Bell (left), and Sherrón Barker, fishing manager at Food For The Poor Jamaica, plant a tree during the recent launch of the tree-planting initiative in Parry Town, St Ann.
1
2

Having built the unenviable reputation as one of St Ann’s crime hotspots, Parry Town is benefitting from a tree-planting project that involves 600 fruit and food trees, courtesy of Food For The Poor (FFTP) Jamaica.

The project, which got off the ground recently, is being implemented by the Ocho Rios Nature Preserve Trust (ORNPT) and sees a wide variety of food trees such as mango, ackee, apple, tamarind, custard apple, guava, and star apple being planted.

The project will not just be a source of food and economic benefit for the people of the community, but will aid in reforestation, says Dr Roosevelt Crooks, chairman of ORNPT.

“The Ocho Rios Nature Preserve Trust is a conservation project to maintain the rainforest, maintain the birds that are indigenous to the area, stop the denuding of the hills, the deforestation, to maintain the rivers and the areas that have been inhabited – whether planned or unplanned – that it can be catered for in terms of the basic amenities,” Crooks explained.

He added: “This present project that we have here is a project to reforest the area with all the trees that are indigenous to the area. It’s a give-back.”

Importantly, Crooks said, too, the reforestation of the area could also help to prevent flooding in the town of Ocho Rios, which has had significant inundation issues since 1995.

Nakhle Hado, director of agriculture and fishing at FFTP, said the organisation was happy to share in the implementation of the project.

“We welcome working with the Ocho Rios Nature Preserve Trust to address environmental challenges, by mitigating natural hazards such as flooding, and to assist the farmers by planting of the trees. And we’re looking forward to doing more work and planting more trees,” Hado stated.

Ian Bell, the councillor for the Beecher Town Division in which Parry Town lies, is happy that the FFTP Jamaica acceded to the request from the ORNPT and believes the project will benefit future generations.

“We’re trying to build back well-needed plants in the community,” Bell pointed out. “Several trees have been destroyed through the burning of coal, persons seeking wire-fence posts, and also persons seeking shores for construction. So we directly choose the fruit trees, because we do not believe they would want to destroy fruit trees for those purposes, but, in the long run, persons will be able to enjoy the fruits of their labour.”

Bell said residents have expressed delight with the project.

Deputy mayor of St Ann’s Bay, Dalas Dickenson, along with personnel from FFTP, the National Environment and Planning Agency, and Boswell Hardware, which co-sponsored the project, joined community members at the start of the project recently.