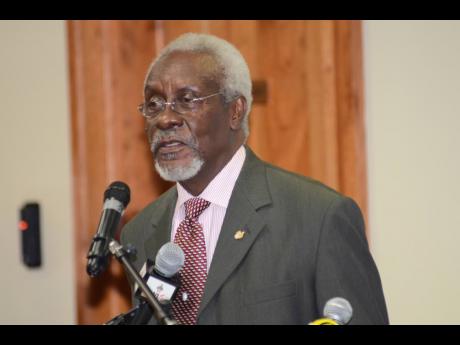 Africa’s contribution of 75,000 doses of AstraZeneca vaccine to Jamaica in April was a good gesture, but former Prime Minister P.J. Patterson wants Africa and the Caribbean to collaborate further by merging their resources and collective voices at...

Africa’s contribution of 75,000 doses of AstraZeneca vaccine to Jamaica in April was a good gesture, but former Prime Minister P.J. Patterson wants Africa and the Caribbean to collaborate further by merging their resources and collective voices at international meetings to ensure positive gains post pandemic.

The vaccines were donated by the South African government and the Africa Medical Supplies Platform (AMSP) on April 8, and contributed to the country hosting its first islandwide blitz, which resulted in 83,000 persons being vaccinated in five days.

“Developed countries with the capacity to develop and produce medical supplies and the vaccines to control the virus ... [keep them for themselves, often far exceeding supplies they need to treat or vaccinate their population and they do so before making excess supplies available to developing countries like us in Africa and the Caribbean,” said Patterson.

Patterson was speaking as he presented the 2021 Marcus Garvey Lecture virtually yesterday on the topic ‘Garvey and the Black Rights Movement in the 21st Century’. The series, now in its 10th year, is organised by the St Ann Homecoming and Heritage Foundation and the St Ann Parish Library, and is one of several worldwide events held to celebrate the life of Jamaica’s first named National Hero who died on June 10, 1940.

Patterson would like for Africa and the Caribbean to act as one and work in a proactive and strategic fashion in order to promote their interests. He believes collaboration between universities and scientific research institutions in both regions is among initiatives that can be pursued to facilitate interdependence.

The former prime minister pointed to continued evidence of racism in the Western Hemisphere, which is a legacy of slavery.

The killing of George Floyd by police on May 25, 2020 in Minneapolis sparked thousands of protest against police brutality across the US and abroad. Describing the incident as horrible, wicked and evil, Patterson noted that since then, police have killed another 229 persons of colour in the United States.

“The slave trade itself and colonialism has ended; however, the legacy of pain and systemic racism are still alive and thriving,” said Patterson, while reiterating the call for reparation.