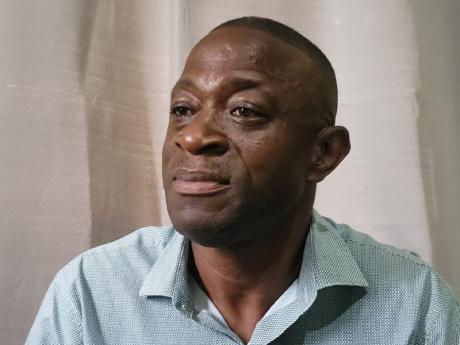 Westmoreland Central Member of Parliament George Wright: “I am here for the people and the benefit of the people."

CONFIDENT that he still enjoys the “full” support of the people of Westmoreland Central and declaring that his work there is far from over, embattled member of parliament George Wright says he is staying put in representational politics. In fact,...

CONFIDENT that he still enjoys the “full” support of the people of Westmoreland Central and declaring that his work there is far from over, embattled member of parliament George Wright says he is staying put in representational politics.

In fact, he told The Sunday Gleaner in an exclusive interview on Friday that he intends to seek re-election whenever a general election is called.

What is however not clear at this stage is whether he will do so as an independent or as a candidate for the incumbent Jamaica Labour Party (JLP).

Wright, who resigned from the JLP over a week ago at the height of a domestic abuse controversy, has not ruled out a return to the Andrew Holness-led governing party.

“No comment on that one,” he told The Sunday Gleaner when asked directly about a return to the fold of the JLP.

However, he said his immediate focus was serving his “underdeveloped” constituency where many were presently unemployed.

Asked if he intends to remain as constituency representative, Wright, without hesitation, replied: “Of course, yes,” adding, “our people come first”.

“I am here for the people and the benefit of the people,” the Westmoreland Central MP stressed.

Wright had been on a leave of absence to deal with personal matters since late April – an absence which coincided with the controversy engulfing him after a video surfaced showing a man brutally beating a woman with his fists and a stool.

He was sought by the police as a person of interest in the matter, but was not charged, as the cops closed the investigation, citing the inconclusive nature of the video and the unwillingness of the two parties it believed were captured in the footage – Wright and Tannisha Singh, who had also both filed reports of assault against each other – to continue with the matter.

Wright has neither confirmed nor denied being the man in the video and, in his first interview since the incident that drew the ire of a nation and repeated calls by several interest groups for him to vacate his seat, the first-time member of parliament refused to discuss the incident, including the response of his female constituents.

“No comment” is all he would say on the matter.

However, an at times seemingly nervous Wright spoke more freely about his return to Parliament last week as the Sexual Harassment Bill was being tabled by Gender Affairs Minister Olivia ‘Babsy’ Grange, saying it was not planned and he had not discussed his return with any member of the JLP.

Wright, while also making it clear that he had not given the JLP any commitments to support its legislative agenda, further revealed that he intends to support legislative changes to stomp out abuse, including the newly tabled bill.

“Of course, I will support them (legislative changes). I don’t support the use of abuse to anyone, whether to women, men, boy or girl. [Not] even animals,” insisted Wright during a sit-down at his Westmoreland Central constituency office.

He insisted that his leave of absence from Gordon House was used to deal with some personal matters, but his handlers intervened midway into his response to object to a question on how he has been coping throughout the ordeal.

“That won’t be discussed. We won’t go nowhere there,” he said. “That can be addressed at a later date.”

And, as it relates to future dates, Wright sees many ahead of him in the House, flatly rebuffing calls for him to give up the seat he won on a JLP ticket last September. In fact, he also intends to offer himself to the people again in the next general election, constitutionally due in 2025.

A second term would make him eligible to receive a pension.

WORK TO BE DONE

For now, he is focused on carrying on the political work to bring a better life to his constituents, some of whom have raised doubts about his ability to effectively serve them as an independent member of the House. But, he insists, the level of support from Central Government for programmes earmarked for the constituency will not wane because of his change in status.

Wright, who polled 8,477 votes last September to wrest the Westmoreland Central seat from People’s National Party (PNP) incumbent Dwayne Vaz (7,288 votes), said the constituents voted for him and not due to a national swing in favour of the JLP, as has been suggested.

“I am a businessman doing business here in the parish over 20 years and finding myself interacting with people,” he said. “They come out to support me in my business and, in listening to some of the cries of the people, I realise that political representation here is very poor. So I decided that I will make a try to represent the people.”

He lost on his first attempt in 2016 but, unlike previous JLP challengers who walked away after failing to topple the strong PNP Westmoreland Central political machinery, Wright stayed the course.

“Over the years, many MP caretakers would have come in, lost and then leave, but I decided to stay. So the 2020 election wasn’t a hard one for me, because I really got the support of the people,” he told The Sunday Gleaner.

Wright rubbished the suggestion that he might have surprised even himself by taking the seat, declaring that the writing was on the wall, based on the support he received from both sides of the political divide.

“Even though rain fell on that day, I still managed to get over 8,000 votes. Well, I would say they voted for me,” he said boldly. “I wouldn’t say it’s just Jamaica Labour Party supporters who voted for me. The PNP supporters voted for me, persons who have no interest in party politics support me because they see that I am working in the constituency.”

He said he was attracted to the JLP because of its policies, adding that he has seen where the JLP had been doing good work.

Asked whether he had considered throwing his lot in with the Opposition PNP in the House, Wright hesitated before saying, “No comment.”

He denied that his admiration of the policies of the Holness administration is an indicator that he has struck a deal with the party behind closed doors, saying he was now focused on addressing the needs of his constituents, including education programmes to prepare the youths for jobs in the outsourcing sector that he is lobbying for to set up shop in the constituency, while re-energizing the hospitality industry.

“I have been working now along with HEART/NTSA [Trust], trying to get some of these youngsters to achieve a skill, because some people are very slow in [academics], but they can gain a skill that can help them during their lifetime,” he said, adding that some 100 laptops and tablets have been distributed to students across the constituency.

“Crime is one of our biggest [issues] here, especially here in central Westmoreland. I overheard, even up to yesterday someone get killed,” Wright said.

The MP aims to continue his lobby to have squatter settlements regularised, while he is hoping to set up a funding scheme for small business operators. Flooding has been a challenge in the constituency for decades, but Wright is hoping to change that narrative with a strong lobby for sufficient funding to correct the problem.

Wright also pointed to several communities that have never had potable water, such as Bird Mountain, Porter’s Mountain and Welcome that must be addressed as a matter of urgency.

But his big dream is for the buildout of a cruise shipping port in the constituency.

Wright has not completely settled on his full team to manage the affairs of the constituency, but says some posts, such as the Constituency Development Fund officer and other crucial posts, have already been filled.

He also expects that some of the JLP constituency staff will be joining his team, but this will be left to their conscience.

However, he said that he has not held talks with his former deputy constituency chair, Councillor Dawnett Foster. Nor did he bid the team farewell.

“I have a team … . I am not necessarily going to change my entire staff, because those who want to come with George Wright will come, regardless of their affiliation, whether they are PNP or JLP, but I do not know what is happening over there,” he said.

“The people said they need a good representative here,” he added, “I have been engaging my constituents and, of course, they want me to remain as their MP because they see where I can work for the betterment of the constituency and the people.”