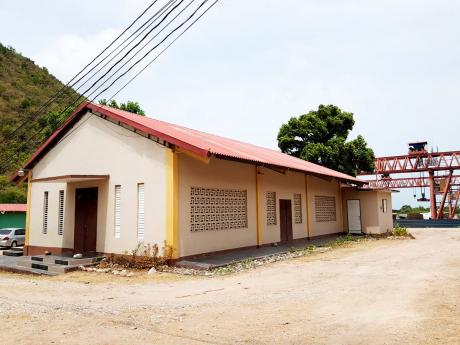 Photo by David Salmon
Heavy machinery owned by China Harbour Engineering Company forms the backdrop against the African Martyrs of Uganda Roman Catholic Church, which will be knocked down. 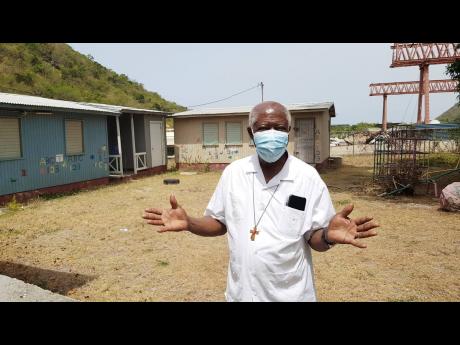 Photo by David Salmon
Deacon Altius Williams says he feels let down by the Government as the African Martyrs of Uganda Roman Catholic Church, as well as a basic school, will be demolished for the construction of the Southern Coastal Highway Improvement Project.
1
2

A shadow now looms over the African Martyrs of Uganda Roman Catholic Church in Bull Bay, St Andrew, which is slated to be steamrolled by the Government’s highway project in what congregants and clergy view as a crude casualty of progress. Salt was...

A shadow now looms over the African Martyrs of Uganda Roman Catholic Church in Bull Bay, St Andrew, which is slated to be steamrolled by the Government’s highway project in what congregants and clergy view as a crude casualty of progress.

Salt was added to African Martyrs’ wounds as thieves pried the church’s doors open on Saturday night and made off with a speaker and a fan, which was preceded by vandalism of the clinic two weeks ago.

After years of pleading, the church is now at imminent risk of being demolished in order to facilitate the Southern Coastal Highway Improvement Project, with 110km of roadway between Harbour View in St Andrew and Port Antonio in Portland set for renovation and 26km from Morant Bay to Cedar Valley in St Thomas.

Recently installed priest, Siju Koikara, who is affectionately called Father Thomas, said that people “emotionally connected” to the four-decade-old church have been left in limbo, with no clarity from works officials on talk of an alternative site.

“We heard the news that this church is going to be knocked down for widening the road. People are very much heartbroken,” Thomas told The Gleaner on Sunday.

Jaqueline Henry, a member of African Martyrs for more than 39 years, recalls several fond memories, including her baptism, wedding, and community service.

“I am disturbed and very sad ... . This church has served this community directly and indirectly because when we have, like, disasters, people live in this church for months because we open the church to them,” she said.

Fellow congregant, Edward Marshall, said that the church has stood in the gap for the community.

African Martyrs of Uganda’s charity, said Marshall, has been extended to fishermen with boats and engines and residents with homes.

Compounding the heartbreak for congregants is the fact that not only will the church be demolished, but other facilities serving the community will also be cleared to make way for the road construction.

Deacon Altius Williams said that the premises houses a clinic, a basic school, a home for a 90-year-old resident, as well as a pastoral centre. The centre was recently renovated and converted into a computer centre by HEART/NSTA and the Universal Service Fund.

“For a Government to want to demolish a church and a clinic that serve over 800 people a month in order to set up the prime minister’s Legacy Project, I hope Jamaicans are watching this,” Williams said.

But the church’s appeal contrasts with the clamour by St Thomas residents who have said that their parish has been forgotten.

The highway is projected to unleash the economic potential of St Thomas, whose commercial potential and tourism possibilities are largely untapped.

Emails seen by The Gleaner show that as far back as January 30, 2018, Williams wrote to Hunter expressing concerns about the road improvement from Harbour View to Yallahs Bridge.

By July, the church learned that the alignment of the highway necessitated the demolition of the Bull Bay Health Centre situated in the African Martyrs of Uganda Roman Catholic Church complex.

In a letter dated July 18, Anthony Wood, parish manager for the Kingston and St Andrew Health Services, advised the church that construction work under way at the clinic should cease because of the proposed demolition.

The email correspondence reveals that subsequent intervention by Daryl Vaz, then minister without portfolio in the Ministry of Economic Growth and Job Creation, led to a meeting held in November 2018 with representatives of the NWA, Mrs Holness, and congregants.

However, to date, Williams said that no clear update has been provided since a June 16, 2020 letter from Vaz was issued.