Gunman chopped to death in Hanover 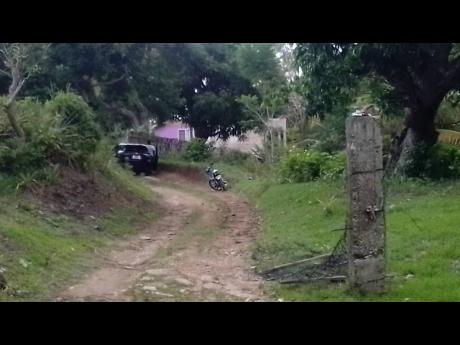 Photo by Hopeton Bucknor
The scene where men chased and shot a tour bus operator in Hanover. Residents later chopped one of the attackers to death.

A man who reportedly chased and fired several shots at a tour bus operator in Blenheim, Hanover, on Monday was cornered and chopped to death by angry residents.

The dead man has been identified by the police as Adrian ‘Killy Killy’ Sweeney, who resided between Flankers, St James, and ‘Russia’ in Savanna-la-Mar, Westmoreland.

His crony managed to escape the wrath of the mob by fleeing in the car in which they travelled to the deep-rural community.

Police reports indicate that shortly after 9 a.m., the tour bus operator, who reportedly went to Blenheim to visit a friend, was standing at the entrance to her home when a Nissan AD Wagon motor car pulled up, with Sweeney and another man alighting and opening fire on him.

The frightened tour operator ran and was chased by the men, who continued firing at him. Despite being hit, the man managed to elude his attackers.

A police-military team that responded to the incident and transported the wounded tour bus operator to hospital, where he was treated and admitted.

According to reports, gunmen have been plaguing the community. It is believed that the AD Wagon might have featured in previous incidents.

In recent weeks, there has been a spate of shootings in Hanover, resulting in four persons being killed and at least six others injured.

The latest killing has increased the murder count in the parish to 21 since the start of the year. That figure represents eight more deaths - or a 62 per cent rise – than for the corresponding period in 2020.