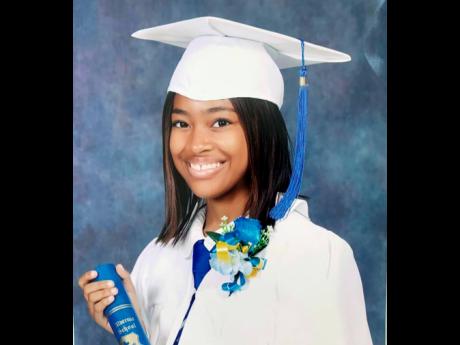 An upper-sixth form student at the Mount Alvernia High School in Montego Bay topped the island in last year’s CAPE law (Unit One) and landed second position in the regional exams.

Manila Cunningham, renowned as a high achiever, is also boasting a GPA just shy of 4.0, as she readies to matriculate at The University of the West Indies, Mona – Western Jamaica Campus (WJC), where she will pursue a Bachelor of Science in International Relations.

The youngster lives by wise words instilled by her first-form teacher, Mrs McKnight-Jones, who told her never to doubt her first answer in an examination, including CAPE – the Caribbean Advanced Proficiency Examinations, which is administered by the Caribbean Examinations Council (CXC).

“I have carried that throughout my years at school and that practice has never failed,” she said, satisfyingly.

Admitting she did not think she would have done so well, the 19-year-old told The Gleaner of the sacrifices of sitting up night after night studying, “plus every single weekend on the phone with my friends asking for help because they were doing extremely well at the subject, getting 100 per cent during every single test in class”.

Confident in her ability

Her mother, Michelle Shelton, was confident in her ability, having recognised her brilliance from as early as age five.

“She was always top of the class,” her mom recalled.

When she got to Mount Alvernia, she remained in the top stream. She is always on the honour roll, a recipient of subject prizes annually, and is a member of the prefect body and different clubs.

Shelton, who operates a catering business, said she was extremely tired and was not prepared to cook on the night the CXC released the standings. She told her daughter to prepare her own meal.

“But after I heard, I don’t know where I got the strength because I prepared anything she wanted,” she quipped. “She is a very quiet child, always studying and is very focused. She’s not a child I have ever needed to monitor. She is independent and responsible.”

“When she started, she didn’t seem very interested in the subject. I decided to work with her. We developed a relationship. I am not surprised. She has maintained a very high standard,” said Trail.

An adjunct lecturer who also lectures at The UWI, Mona – WJC, Trail said her entire class at Mount Alvernia did well.

Cunningham also gained distinction in history, literature and Caribbean studies, and plans to take on international law in the future.