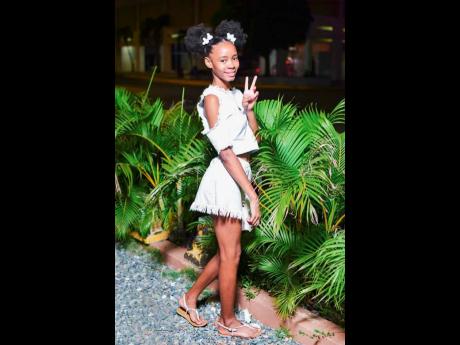 Contributed
Damoya Hall was shot and killed by gunmen on Third Street in Trench Town on Sunday. 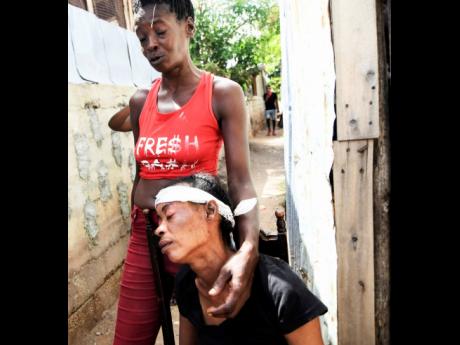 Rudolph Brown/Photographer
Aretha Ellison (seated), mother of Damoya Hall, grieves Sunday’s killing of the teenager while being comforted by Shelly-Ann Turner, a resident of Third Street in Trench Town.
1
2

It was only last December that Damoya Hall was a picture of happiness as she celebrated her sweet sixteenth birthday.

On Sunday evening, about 6:40, she lay lifeless on the ground with a bullet in her head.

Also killed on Third Street in Trench Town was 23-year-old Elvin James, who was hit in the hand, stomach, and foot in an attack linked to a swirling gang feud.

As they mourned her death which has been attributed to a gang feud, residents in the violence-wracked constituency of St Andrew Southern ripped into the security forces, claiming that police deployed in Trench Town turned a blind eye to some gunmen.

“Some different set a police need fi come inna di place because the police dem pick dem side,” said a cousin of Hall.

“Police sit down pon one side and gunman deh pon the other side sit down with gun,” another resident said, befuddled at the police’s perceived inability to arrest and charge perpetrators of gun violence.

Aretha Ellison, Hall’s mother, leaned on Turner’s thigh for comfort as she sat weakened by grief.

“Mi send her go over mi madda yard go wash plate. When me look outside, me see her drop and me try call somebody fi help me but a bare shot a fire,” said the 41-year-old in-between hoarse cries.

Superintendent Michael Phipps, who is in charge of the Kingston Western Police Division, has denied the allegations.

Family members said upon hearing the news, her father who is in prison needed medical care after fainting.

Hall’s aunt, Shelly-Ann Turner, told The Gleaner that the peace of Sunday evenings is regularly interrupted by the soundtrack of gunfire.

“Dem did already come and nuh see nobody and dem come back again. Dem all fire after her grandmother a couple Sunday ago,” Turner said, tears running down her face.

“Weh we haffi guh do fi mek this stop?” she asked.

James, whose residence is adjacent to Hall’s, had left his mother’s home to live with his relatives.

His mother, Ann-Marie Blackstock, 54, told The Gleaner that she had bailed him in February.

The family of the 16-year-old, a former Charlie Smith High student and aspiring doctor or designer, suspects that the shooting was done by someone aligned to the Brooklyn Gang.

Keimo ‘Not Nice’ Tingle has been named as a person of interest in the shooting.

Other persons on the police radar are Keimo Roache and a man who goes by the name ‘CJ’, who is reportedly part of the Brooklyn Gang, and Shemar ‘Garsha’ Harrison, Fitzroy Robinson and Joshane ‘Tanto’ Thomas from the Socks Gang.

Mark Golding, opposition leader and member of parliament for St Andrew South, said that effective law enforcement was required to quell the violence.

“I will be speaking to the divisional commander about it and I expect the police to be forthcoming with some kind of strategy on the matter,” he told The Gleaner.

Over the years, there has been an exodus of women from Third Street with the flaring violence. However, while two women who are self-professed prayer warriors chanted up and down the street crying for peace, other residents called out the involvement of women who have been aiding and abetting the gangsters.

Year-on-year, murders and shootings have increased by 11 per cent and 25 per cent, respectively, in the Kingston Western Police Division.

Phipps told The Gleaner that women are part of the nucleus of gangs, giving them cover and support.

“I went into the area this morning and they were taunting each other, throwing stones at each other, who is related to whom,” he said, adding that the level of protection the gunmen get from women is “unbelievable”.

Phipps said that the Socks and Brooklyn gangs have been at war for an extended period. Several reputed members have been arrested and charged, he said.

1. Report all incidents of crime whether or not they are victims.

2. Give up gangsters and the guns.

5. Get involved in community-related and social-intervention activities.