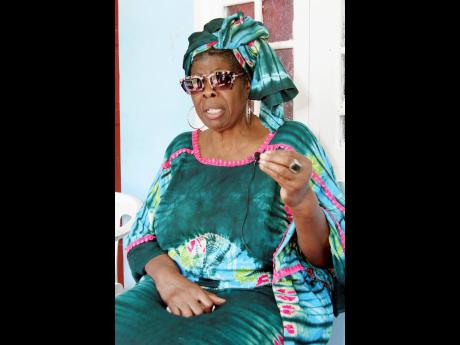 Nathaniel Stewart/Photographer
Katherine Howell, daughter of Leonard Howell, who found the Rastafarian movement, said her father deserves greater respect for his sacrifice for the struggle for black pride. 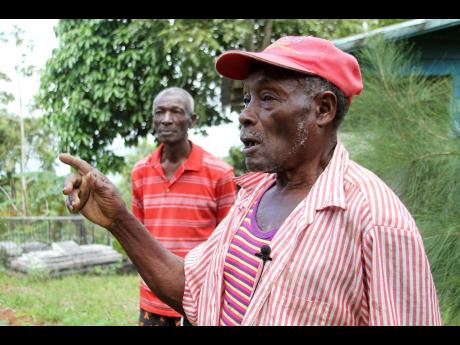 Nathaniel Stewart/Photographer
Dudley Howell and Manley Howell of Redlands, Clarendon, are proud of their late cousin, Leonard Howell, who found the Rastafarian movement.
1
2

The daughter of the Clarendon man who founded Rastafarianism is demanding reparation and respect for years of abuse by Jamaican state authorities after he birthed an Afrocentric religious movement that has gained widespread cultural appeal globally...

The daughter of the Clarendon man who founded Rastafarianism is demanding reparation and respect for years of abuse by Jamaican state authorities after he birthed an Afrocentric religious movement that has gained widespread cultural appeal globally.

Katherine Howell said that her father, Leonard Percival Howell, has never been received the due regard for promoting one of the most identifiable religions formed in the 20th century and which preached selfhood and black pride.

Today marks the 123rd anniversary of Howell’s birth – a juncture the family believes is appropriate for the celebration of his sacrifice. He died in February 1981.

Speaking at the family home in Redlands, Clarendon, on Tuesday, Katherine recalled being traumatised as a child, citing constant abuse and harassment meted out to her father.

“When my father did street meetings teaching about Rastafari, he was always molested and brutalised because Rasta has always been brutalised and discriminated against from way back, because we did not conform to segregation, discrimination and their ideologies,” she said.

Katherine told The Gleaner that her father was berated for his advocacy of the divinity of Haile Selassie I, emperor of Ethiopia from 1930 to 1974.

“[The crowning of Haile Selassie] gave us black people a sense of superiority, so Howell had to show black people, ‘Look, you are black superiority here in Jamaica,’ and the English people could not deal with that.

“’How black people all of a sudden feel that they’re superior?’ So that was a big problem when my dad started telling these people that they were not born as slaves, but tried to show them they were superior above all race.”

Katherine said that her father and his followers – the Howellites – were chastised and constantly targeted by the police – a refrain that is regularly recounted by elders of the Rastafarian faith even now.

Howell was arrested and charged in December 1933 with sedition and was sentenced and imprisoned in March the following year for offending British royalty, the governor of Jamaica, and the governments of Jamaica and Great Britain.

The indictment said Howell attempted “to create disaffection among the subjects” of the British monarchy, and “to disturb public peace and tranquility” in Jamaica. He was accused of uttering “language liable to stir up hatred between classes and bring the Sovereign into contempt and Government and those administering it into hatred that was altogether a different thing”.

Katherine said that the abuse of Rastafarians fuelled her father’s decision to purchase the premises in Pinnacle, St Catherine – home of the first Rastafarian community which she cited as a safe place for people of the religion.

The Government pledged to declare the disputed lands a heritage site but the family still nurses grievances with the corporate interests who possess property in the hills of Sligoville over a row harking back to 2016.

She told The Gleaner that the heritage site plans are being hindered.

“My dad bought the place, and it has been taken over by St Jago Hills Development,” she said.

“And right now we are trying to talk to the Government to let them know it is important, it is imperative to have LPH (Leonard Percival Howell) Foundation control the very site,” she said.

Katherine praised her father for giving “his sweat, blood, and tears” to the Rastafarian movement, and is demanding reparation and repatriation to the Sligoville ancestral home.

Retired University of the West Indies professor of Caribbean political philosophy and culture, Dr Clinton Hutton, said that Howell stands as one of Jamaica’s most influential people.

“What has now become a global movement would not have been possible without Leonard Percival Howell making those early steps, and those early theological and philosophical explanations for what Rastafari is.

“It has influenced the global population in their anti-colonial struggles, in their struggle for peace, freedom and justice, and reparation and repatriation,” he said.

And Leslie Howell, Leonard’s cousin, has lauded him as a voice for the people.

“I respect him because he fought a good fight to show society that is not everything the Government did was right,” he said of the man he referred to as ‘Pinnacle King’.

“He had some problems with the Government and the Government destroyed his property and whatever he had. Them even pass him say him mad. He suffered a lot through them but he gained recognition from foreigners.”