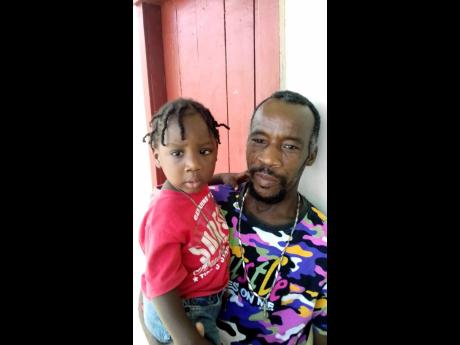 Photo by Hopeton Bucknor
Leonard Haughton has been reunited with his 17-month-old son Hayden.

There are hardly words to express the relief and joy market vendor and construction worker Leonard ‘Fargo’ Haughton is feeling today, having been reunited with his 17-month-old son, Hayden Haughton, who was claimed by another man following the...

There are hardly words to express the relief and joy market vendor and construction worker Leonard ‘Fargo’ Haughton is feeling today, having been reunited with his 17-month-old son, Hayden Haughton, who was claimed by another man following the death of the child’s mother almost a year ago.

Haughton’s life was torn apart last year June when Kayon ‘Yoka’ Lewis, the mother of his two children, died, leaving them in the custody of their grandmother.

When Haughton went to retrieve the children, he was told that he could only take the girl because another man, who had also been in a relationship with their mother, had claimed the boy.

With the grandmother insisting that Haughton was not the father of the baby boy, he left the community with a broken heart.

Determined not to give up his son, Haughton reported the matter to the police.

According to Haughton, the cops advised him to take the matter to court.

He also shared his tale of loss and emptiness with The Gleaner’s sister publication, THE STAR, last September.

After the story was published, he began receiving calls, and one tip led him to a man named Craig Higgins living at Top Road in Cambridge, St James.

“Mi do mi own investigations and find him yard inna Cambridge, and then mi come back and tell the police,” a relieved Haughton said yesterday. “When the police dem finally find him, him tell dem seh ‘CJ’ a fi him son.”

The cops decided against arresting the man and placed the matter before the courts.

In May, the judge ordered a DNA test to determine the child’s biological father.

When Haughton returned to court on June 7, the DNA test results confirmed that he was the father of the infant.

“Him suppose to all give mi di baby papers dem, and him nuh willing fi give mi dem, ‘bout him can’t find dem, so mi gwan haffi go back up a di court because the clinic don’t want accept him without him documents,” said Haughton.

The relieved Haughton said he is still amazed by the whole situation, especially since the child physical’s appearance was far different from Higgins’.

“Mi haffi laugh when mi hear the judge ask him seh if him blind, if him can look pon the child and really accept it as his own,” said Haughton.