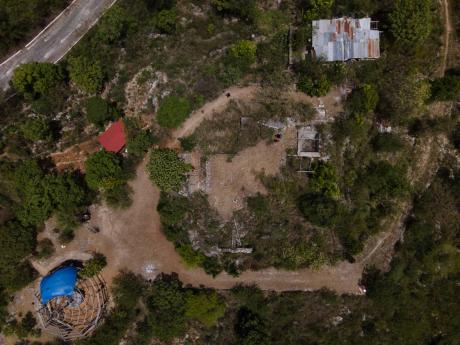 Gladstone Taylor/Multimedia Photo Editor
Pinnacle, located in St Jago Hills, St Catherine, as seen on Wednesday June 16, 2021. Yesterday, Rastafarians gathered there for the celebration of 123rd anniversary of the birth of Leonard Howell, who is regarded as the founder of the Rastafarian movement in Jamaica. 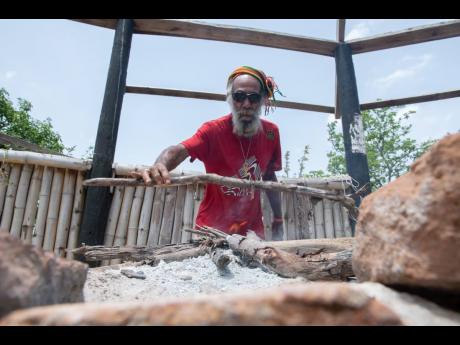 Gladstone Taylor/Multimedia Photo Editor
Rudolph Bailey, also known as Ras Kremlin, chairman, Dreaded Nyabinghi Military Council, adds dried wood to the fire in the tabernacle, which is currently in need of repairs as it currently lacks it thatch roof, at the celebrations in Pinnacle, St Catherine, yesterday. 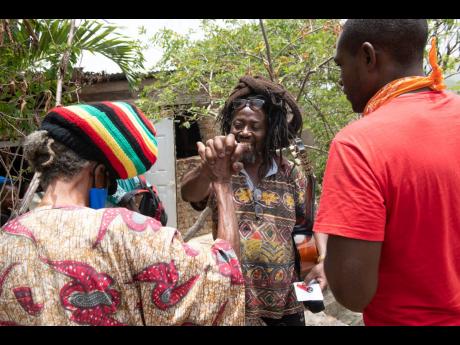 Gladstone Taylor/Multimedia Photo Editor
Ras Drick-I (centre) greets a group on arrival at Pinnacle on Wednesday. They were among numerous Rastafarians who visited the area to celebrate the anniversary of the birth of Leonard Howell.
1
2
3

Rastafarians from across Jamaica gathered yesterday to celebrate the 123rd anniversary of the birth of their founder, Leonard Howell, at Pinnacle in St Catherine. It is the site where they claim Howell had acquired over 500 acres of land for...

Rastafarians from across Jamaica gathered yesterday to celebrate the 123rd anniversary of the birth of their founder, Leonard Howell, at Pinnacle in St Catherine. It is the site where they claim Howell had acquired over 500 acres of land for members of the faith but which the court ruled was rightfully owned by St Jago Development Company Limited.

The Rastafarian community, however, is still harbouring dreams of the Pinnacle village being declared a heritage site.

The group met on Wednesday against the background of a promise made by Culture Minister Olivia Grange in her 2016-17 Sectoral Debate presentation to expand the acquisition of six lots to establish the Rastafarian heritage site at Pinnacle, a section of the property that was included in the St Jago Hills residential community development.

Chairman of the Dreaded Nyahbinghi Military Council and chief spokesman for the group, Rudolph Bailey, aka Ras Kremlin, says they have not heard much since the announcement by the minister five years ago.

“We have got various promises. To begin with, we did not accept the suggestion of six lots because we don’t work with six. The minister had promised to give us seven instead,” Bailey stated.

Grange stated at the time that the Government was committed to six lots even though Cabinet had approved the purchase of five lots – 198 to 202 – that would cover the heritage site.

She also indicated that the Jamaica National Heritage Trust had done exploratory work on the sixth lot and should have informed her of the outcome of the venture.

Although this more than just lot 199 that was singularly declared a national monument, Bailey is insisting that the seven lots will take into account all the historical sites, including the tabernacle, where the Rastafarians stage their annual celebration in honour of Howell.

“The Land Agency came here and surveyed the lots a couple years ago, but since that, nothing else has happened, so we are meeting here today to chart our way forward,” Bailey said.

He said the heritage site declaration would preserve the rich history of the Pinnacle and its artefacts, including the bakery, grave sites, and other places of historical value in the village that was established by their founder in 1940.

“The question is not a monument. It is about what is here, and what is here is a heritage site. We are totally opposed to a monument because we believe that monuments are controlled by Government,” Bailey continued.

Grange did not respond to The Gleaner request for an update on the status of the Government’s commitment to the Rastafarian community.

St Jago Development Company Limited CEO Richard Lake told The Gleaner that the company has been approached by the Government, but they have not proceeded to formalise the purchase of the lots.

“We don’t have a problem selling the lands to establish the heritage site because we have always been in support of the preservation of Jamaica’s heritage. The only condition we have stipulated is that the residents be in tune with what is going on there. It cannot be an open-ended situation in which a residential community is disturbed,” Lake said.

He added that whenever the purchase is made, it must be done at market value.

Bailey said his group wants to schedule a meeting with the citizens’ association, but due to the pandemic, it has not yet been convened.

He said the initial responses from residents are very encouraging.