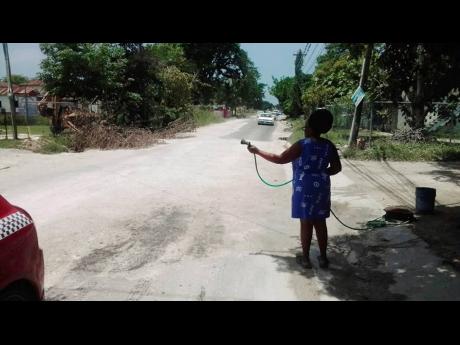 Photo by Hopeton Bucknor
A resident sprays water on the exposed marl to lessen the dust nuisance along the recently paved roadway in Chantilly, Westmoreland, which was damaged less than a week after being handed over. 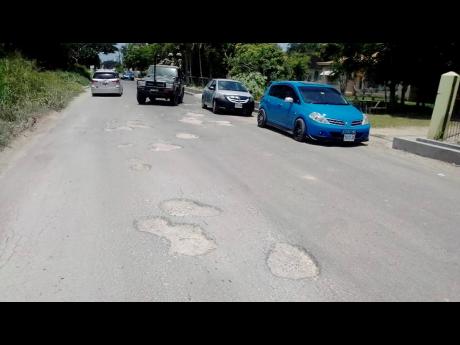 Photo by Hopeton Bucknor
Potholes litter the newly resurfaced roadway, much to the annoyance of motorists and residents of Chantilly.
1
2

After a $27-million rehabilitation, a roadway in Chantilly, Westmoreland, which was handed over by a subcontractor in late May, is now in disrepair after three showers of rain, much to the disgust of residents.

Yesterday morning, disgruntled taxi operators and residents lashed out at the contractors and government representatives, claiming that the work was a waste of taxpayers’ money.

A woman who operates a business outside her gate was seen using a water hose to wet the exposed marl.

“Mi did so glad when mi see dem a surface the road and a fix the drain dem, but dem only last few days, and now dust would a kill mi. It better dem did mek it stay because mi don’t see how road fi fix today and mash up tomorrow,” lamented the woman.

Janell Ricketts, community and public relations officer at the National Works Agency (NWA), told The Gleaner that the situation was most unfortunate.

“That section of roadway, which is approximately 500 metres, was contracted to the Nubian-1 Contractors at a cost of $27 million,” said Ricketts. “The project started on February 1 of this year, and the works, which involved drains, curb and channels and the paving of the road surface, were finished on May 19.”

She added: “We have noticed that there was peeling of the roadway, so the contractor has been asked to rip up that section and to carry out repairs in terms of asphalting. The initial work was not yet certified for payment, so the contractor, as early as last week, was in the area ripping up the affected sections where they have had failures.”

Ricketts said that the contractor was certified and selected through a bidding process, so the NWA will not point any fingers.

“The good thing is that it won’t come at a cost to the public purse,” she said, pointing out that such contracts have a defects liability period.

Savanna-la-Mar Mayor Bertel Moore was peeved by the rapid disintegration of the road surface.

“I have never seen something like this in all my life in this country, Never, never, never. It is a disgrace, totally,” said the veteran councillor. “I don’t know who (contractor) it is, ... but, if this is the way [he works], he must not – and I say not – get government contract.”