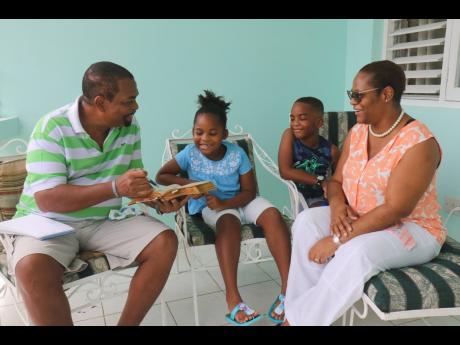 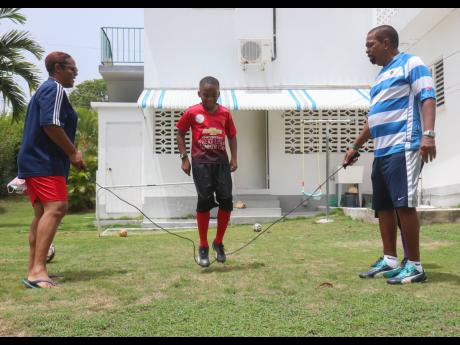 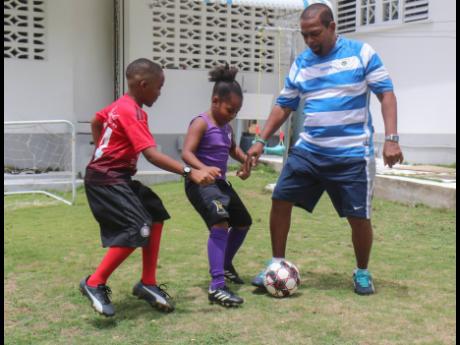 Ashley Anguin/Photographer
From left: Ravi Peters and his sister Rebekah try to tackle their father Richard Peters during a football game last Sunday at their home.
1
2
3

WESTERN BUREAU: Richard Peters promised his daughter Rebekah that he wasn’t going to die. That promise kept him alive and was the centre of most of his prayers while fighting for his life with COVID-19 at the Cornwall Regional Hospital (CRH)...

Richard Peters promised his daughter Rebekah that he wasn’t going to die. That promise kept him alive and was the centre of most of his prayers while fighting for his life with COVID-19 at the Cornwall Regional Hospital (CRH) recently.

“I pleaded with God to let me not disappoint my daughter! And He did not,” was the testimony of conviction that Peters gave weeks after being released from the St James-based hospital.

Last Wednesday, The Sunday Gleaner spoke with six-year-old Rebekah, whose excitement was undeniable when she spoke of her father and best friend.

“Daddy kept his promise to me to return from the hospital. It felt good when he returned home,” she declared.

As happy as Rebekah was, so was her eight-year-old brother Ravi. The two had Gleaner readers teary-eyed in March when they stood behind the gates of the CRH Intensive Care Unit waving a cartridge paper banner with the words, “Dad, We Love You”. Peters could only view his children through a small window fWom his hospital bed.

Inspired by the undeniable love of his wife Nina and his two children, Peters was happy to finally leave the hospital and return to their Montego Bay home ready to do even more with his family.

“Nina will tell you of the many times she would encounter bags of fruits and vegetables left on our gate, while I was in the hospital and even after I made it out,” he stated.

Back home, the former national footballer, born in Trinidad, but who represented the Youth Team in Dominica and whose face remains in the Hall of Fame at Rutgers University in the United States, has literally turned his Jamaica-born son and daughter into avid footballers, skipping champions and fish in the swimming pool.

“One day I will be like Daddy, playing football; we (me and my brother) will be great footballers. I am a striker. My daddy is awesome, he is a super daddy. He helps me with classes, he is a bright man. I love him, he is the best,” were the accolades that young Rebekah threw at her dad during the interview.

While Ravi shared that he was planning “something big for Father’s Day, but it is a secret”.

The youngster, who was in the middle of his end-of-year exams when The Sunday Gleaner spoke with him, said his dad was his tutor, a fun father, and who prays with them.

For Nina Peters, who was born in Kingston, her kids hit the jackpot, being blessed with a father who is dedicated, fun-loving and adventurous.

“Everything is bigger than him. His thing is to leave a legacy for his children and his children’s children. He is in the process of building strong individuals,” she stated with pride, adding that her husband was adamant about the word of God and foundation for him was key.

The proud wife and mother added, “Having come from nothing, going to school barefooted, he is making his children well-rounded and ready for the world, ensuring they have an appreciation of everything that life has to offer.”

As fantastic as he is as a father, Peters has been awarded the moniker ‘Mr Wonderful’ as a husband by his wife Nina, who balances a busy schedule as a banker at Jamaica National. She was quick to point out that he is imperfectly perfect for her.

“He keeps me grounded. He pushes me to the next limit. He is an encouraging partner. He makes me feel like an equal partner and that there is nothing too large to achieve. I feel liberated,” she stated.

This Father’s Day, Peters and his family kick-started the weekend with a 5K walk, and are expected to worship together this morning at the Unity Hall Open Bible Church, like they do every Sunday and Wednesday, and will attend a Kiwanis-hosted online event for fathers on Monday.

Peters has written a Father’s Day poem, which will be delivered by a group of youngsters at the Kiwanis event. It speaks to the fact that anyone can be a father, but it is important for the children to have a role model – a daddy.

“The statistics show too many single mothers bringing up kids, and although many have had successes, too many have gone astray,” said Peters.

Today, as well, Peters expects his daughter Rebekah to come into his room for her daily morning hug.