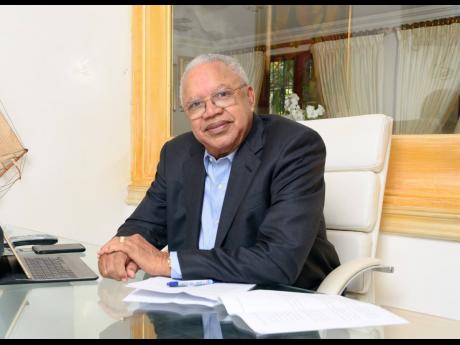 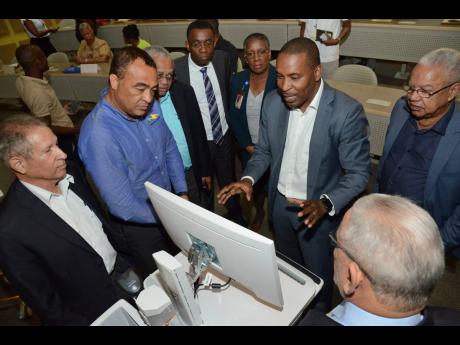 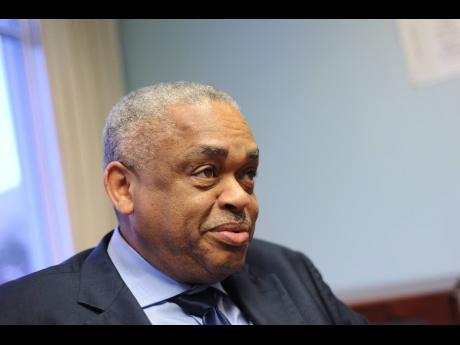 AS The $500-million information technology scandal rocking the Mona Campus of The University of the West Indies (UWI) deepens, former Principal Professor Archibald McDonald has admitted that there is “solid basis” for the contract for the Hospital Information Management System (HIMS) software that is four years past its April 2017 delivery date be renegotiated.

Making it clear that he was speaking in a personal capacity, McDonald admitted that “poor management” was behind the limping project at the University Hospital of the West Indies, which is being funded by UWI Mona.

“I fully agree that the five to six years since the project started is too long, even with the COVID-19 pandemic,” McDonald told The Sunday Gleaner last evening. “There are, however, several reasons for this, but they all amount to poor management.”

He added: “Although I am disappointed in the slow progress of the installation, I think the UHWI should keep the project and renegotiate the contract. There is solid basis for this, given the fact that the software has not been installed in any of the UWI entities and the UWI has little or no appetite for this.”

The Sunday Gleaner has also discovered that the implementing company, Advanced Integrated Systems (AIS), has closer ties with the limping project than previously known.

It raises further questions about the single-sourced procurement and due diligence associated with the unending spending of millions of dollars on the project.

The September 8, 2015 contract shows that Mona agreed to buy HIMS from Health Administration Systems (HAS), an opaque St Lucia-registered company.

Mona paid US$1.25 million for the software, which is being implemented by the Douglas Halsall-led AIS, a Jamaican incorporated company, which the contract said would provide “local administration”.

AIS, which collects US$600,000 from The UWI in annual maintenance fees, has a stake in Suvarna Technosoft, the India-based company that developed HIMS.

There is very little detail, however, on the ownership of HAS and it is unclear to date whether The UWI Mona knew precisely to whom it was paying millions of dollars.

The contract was signed by then principal, McDonald, who is now the deputy chairman of the UHWI, whom some board members want gone over the fiasco.

In an earlier interaction with our news team last Thursday, asked whether he knew any of the principals of HAS, McDonald suggested that HAS was connected to Suvarna and that two officials from India visited the Mona Campus during the contract negotiations.

“This is essentially an Indian company in partnership with AIS as their local agent,” he said.

However, records filed with the Jamaica Stock Exchange (JSE) suggest that HAS may have principals closer home.

Multiple filings by First Rock Capital Holdings, an investment holding company also incorporated in St Lucia, point out that Halsall, a director, is also a “connected party” of HAS.

Halsall jointly holds 924,000 shares with Stacey Peart, in addition to the 3.9 million held by HAS, according to First Rock’s report to shareholders for the quarter ending March 31, 2021 that was posted on the JSE’s website on May 13.

The other two companies listed as ‘connected’ were Q-Mall Limited and AIS, which are owned by Halsall.

Halsall did not reply to questions seeking confirmation that he is a shareholder, director and beneficial owner of HAS, which also includes other relatives.

The businessman is well known for his decades of work in technology, particularly through the introduction of ATMs in Jamaica and in health insurance swipe-card payments.

It has also emerged that around the time that the Mona Campus was engaging HAS, the Cayman Islands government terminated a US$13-million contract with AIS Cayman Ltd for the implementation of a patient health claims adjudication system.

“The AIS system is not operating,” stated Alden McLaughlin, the then premier of the British overseas territory, on the problems that plagued the roll-out in public hospitals, and reported by the Cayman Compass in May 2016.

The contract was inked in 2010 following presentations led by Halsall on CarePay card system pushed by his company in Jamaica.

The contract ended amid a corruption scandal involving the Cayman’s Health Services Authority and its former board chairman, Canover Watson, who is serving time in prison on bribery and fraud convictions.

Watson was punished for using his position at the authority to pursue the contract and then diverting funds to personal accounts in a racket that involved his then business partner, Jeffrey Webb, the disgraced former FIFA top official.

A pharmacy system that was also being implemented with Suvarna – the company behind HIMS at UHWI – was also to be phased out in late 2016 and a new provider selected.

“AIS Cayman was a licensee of our health insurance claims adjudication platform. This agreement was terminated,” said Shekar Reddy, director of health applications at AIS Jamaica, declining to explain why the deal was brought to an end.

McDonald said he “informally” learnt of the issues in Cayman, but could not say whether Mona took caution in its pursuit of the HIMS project at the UHWI.

The HIMS project was expected to digitise the UHWI’s records and work processes, but six years after the contract signing, it is yet to reach most of the hospital’s wards, although functioning in some departments.

A 2018 UHWI project status report, produced within two years of the Cayman situation, was scathing of HIMS as appearing to be “still in development” with the project running beyond its deadline, over budget, and fraught with problems.

Unlike the UHWI which would have to follow government procurement guidelines, the regional governance of The UWI gives it greater autonomy over the award of contracts.

But the former principal is rejecting claims that routing the contract through The UWI and not the UHWI was an attempt to circumvent Jamaica’s procurement law, noting that it made sense for Mona to be the procuring entity because it was home to most of the clinical facilities where HIMS would be rolled out.

“We got advice from the legal minds, who said they didn’t see anything wrong, but we went further. We went to the Office of the Contractor General (now subsumed into the Integrity Commission) and asked if there was a problem with it and they said no because the UHWI is a sister institution,” he explained.

The HIMS project, McDonald said, was taken on following a presentation from AIS.

The project was later approved by the board of the Mona Health Services, a subsidiary of the university established in 2007 to generate review for the Faculty of Medical Sciences, he said.

There was also “no objection” from the Finance and General Purposes Committee of the Mona.

As principal, McDonald headed both committees.

However, despite McDonald’s confidence that everything was above board and that “I have nothing to cover up”, the current Mona administration of Professor Dale Webber is yet to confirm that the project was properly approved and went through the appropriate procurement processes.

“It would surprising if a contract like that did not go before the Campus Council and I don’t recall it did,” said an official of the highest decision-making body at Mona.

In a June 11 statement, Mona said it could not speak on procurement and due diligence processes because of an ongoing review started in 2019, a year after Webber took over from McDonald, who was principal from 2013.

McDonald was irked by the statement, which started out by distancing the current administration from his tenure by noting that the HIMS “was a project implemented in 2016 and “precedes the incumbency” of Mona’s current senior management team.

“There is hardly any need to point that out. We’re running a relay. There is no point in tearing down your predecessor. You’ve never heard me make a negative statement about Gordon Shirley,” he said referring to Professor Shirley whom he replaced in 2013.

A day after The Sunday Gleaner’s June 13 breaking story, Herman Athias, the UHWI’s chief information and technology officer, resigned without stating a reasons.

However, senior hospital sources say Athias, who joined the UHWI in December 2019, well after the project started, clashed on numerous occasions with senior officials there over the HIMS.

“There was a bruising board meeting recently involving the senior medical leadership where tempers flared. He wanted to go long ago and that meeting followed by the publication of the story made it all easier,” said an official, who didn’t want to be named because they were not authorised to speak on the issue.

The UHWI’s chief executive officer, Kevin Allen, has directed all questions to The UWI, while Chairman Professor Evan Duggan and Dr Carl Bruce, the medical chief of staff, did not respond to questions submitted last Thursday.

Bruce has urged our news team to visit the hospital to observe the HIMS in operation.

Duggan presided over a contentious board meeting last Wednesday, where McDonald reportedly defended his role in the project, even as the chairman voiced his concerns about the project his predecessor, James Moss-Solomon, said was “bleeding” the hospital.

Some board members quietly want McDonald to go, with one arguing that “there needs to be accountability” because of the “clear absence of due diligence”.

“What are we telling taxpayers when we are spending millions of dollars on a project that just cannot be implemented? The university and the hospital are under severe financial pressure. And this must just slide?” argued the senior hospital official, who said “strong political support” for McDonald means he will not be easily “dislodged”.

“Is Tufton going just sit by? Is the Government happy that over $500 million has just been spent like that with very little to show?” added the member, referring to Health Minister Dr Christopher Tufton, who said he has asked Duggan for a brief on the situation. A deadline was not provided.

Tufton’s ministry is about to embark on a billion-dollar health digitisation project, but has so far failed to provide the names of committee members the minister announced would oversee the project.

A supplier is yet to be selected and some observers believe the timing of the HIMS complaints is to prevent Halsall’s firm from winning the contract.

While Mona has declared the main costs as the HIMS licence fee and annual maintenance, the UHWI has reportedly had to pay significant costs to “re-engineer” its facilities.

Expenses related to the implementation were not shared with staff at a June 10 UHWI staff meeting, where the head of finance, Dwight Salmon, said that manoeuvring the current financial year means “we would need to be very, very strict in terms of how we utilise the limited financial resources that is available to us”.

UWI Vice Chancellor Professor Hilary Beckles is yet to answer questions on whether he would support an independent audit of the contract at a campus he said needed a “revolution” because of the financial burden it has been on the regional institution.

The Integrity Commission has acknowledged receiving complaints about the project from a whistle-blowing group. By law, it is barred from saying whether any investigation is under way, although any probe is likely restricted to the UHWI.

The UWI Mona is not wholly subject to Jamaican law.