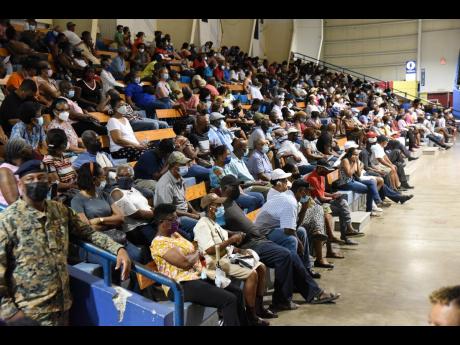 Ian Allen/Photographer
The National Arena in St Andrew had to be closed early because of the large turnout. A total of 1,507 persons were inoculated with their second dose of the COVID-19 shot at the National Arena, the health ministry said.

Several persons both under and over the age of 50 years who turned out at COVID-19 vaccination blitz sites across the island yesterday expressed their annoyance at not being able to get their second dose of the vaccine.

Karine Francis, who is under 50 and a resident of Longville Park, Clarendon, said she set aside her business and arrived at the Denbigh Agricultural Showground in the parish ready to receive her second dose only to be barred from entering by security personnel at the gate.

“This is total madness! I received a call on Tuesday, they went to great lengths to find me – calling my fiancé before they finally got me to make the appointment, so if plans changed why couldn’t they make the same effort to cancel it,” she quipped.

Francis said she did not know about the change that only persons over 50 would be accommodated this weekend for the second dose of the vaccine manufactured by AstraZeneca.

On Thursday, the Ministry of Health & Wellness announced a delay in the administration of the second dose of the COVID-19 vaccine for people under 50 years old because of limited supplies. The second dose of the COVID vaccine becomes due eight to 12 weeks after the first dose. Those affected by the delay in the schedule for the second inoculation are now in their eighth to 10th week since their first dose. However, Health Minister Dr Christopher Tufton gave the assurance that every effort is being made to secure additional vaccines to administer the second dose around the 12th week.

Persons under 50 who were previously advised by text messages to show up for their second dose at this weekend’s blitz were reportedly sent a second text message advising of the delay.

Francis said she was not the only one caught in the trap yesterday, as there were about four others in her group who were turned away. She said they shared the same fears, as they were wondering what will happen to them if they do not get the vaccine within the allotted time frame.

“First of all, I want to apologise to those who were inconvenienced yesterday. Both those under 50 who showed up, and those over 50 who were not able to get their shot because of the overwhelming turnout,” Tufton told The Sunday Gleaner yesterday.

“Importantly, I want to reassure everyone who are to get their second dose that we are working very hard to ensure that that happens and in the allotted time frame. Discussions are taking place and we are working to increase supplies. During the course of next week, we will provide better specifics on that.”

The minister also noted that July and August should bring a smother flow of the vaccination process.

“We are working on it. We will make it happen,” he stressed.

Father and son duo 83-year-old James Carter and 53-year-old Fitzerrol were among the lucky ones. Yesterday they got their second doses.

Fitzerrol described it as a “special” moment, especially in light of the fact that he is the only family member living in Jamaica and directly responsible for taking care of his father.

“So I made it my point of duty to bring him the first time to get the jab. I don’t want to be the one to take the virus to him,” were his sobering words.

For James, it was a complete joy to be out with his son and there was also a feeling of comfort and being at home.

“You nuh see how we resemble?” the father teased.

Medical Officer of Health for Clarendon, Dr Kimberly Scarlett Campbell, said she had a challenge on her hands yesterday, due to the overwhelming turnout, but expressed that she was pleased that persons were eager to get vaccinated.

“Persons have been turning up who are below the age of 50 years and we have had to be turning them away because we are strict in that persons 50 and over who have already received their vaccination be first,” she shared.

Over in at Clamards Park in Port Maria, St Mary, the large turnout was just as encouraging.

“I was so anxious overnight that I hardly slept,” said 59-year-old Hubert Thomas of Nelson Street.

“When I got my first vaccine I was a bit scared after hearing about the side effects. But afterwards I felt good and I just could not wait for this one. There is nothing to fear about this vaccine and I am not planning to go on no ventilator, because most of the people that go on ventilators, after contracting the coronavirus, end up dying. So I’m urging those in doubt to go get their vaccine.”

In Portland, the vaccination process, for most part, went smoothly, although a woman, who gave her name only as Janice, told The Sunday Gleaner that she was provided a scheduled date to get her second dose, but that she was not able to do so.

“I am very disappointed as I was really looking forward to getting my second jab,” she said. “It is quite clear that the Government of the day blundered badly. Many young people like myself, who are willing to take the vaccine to ensure that the country achieve herd immunity, are left out in the cold. Right now, we nuh know when we as young people will get the opportunity to get our second dose. It doesn’t make sense for the Ministry of Health to give us a date for our second vaccine, but now have to postpone. It’s poor organisation and planning on their part.”

For Portland resident Patrick ‘Dapperado’ Cooper, after receiving his second dose he felt like “running a marathon”.

In the meantime, the National Arena in St Andrew had to be closed early because of the large turnout. A total of 1,507 persons were inoculated with their second dose at the National Arena, the health ministry said.

“At about 10 a.m., we reached full capacity at the National Arena and unfortunately had to announce the closure of the site. Our operations there will be suspended for Sunday, June 20, but other blitz sites across the island will remain open to the public by appointment,” Dr Tufton stated.

The second-dose blitz operation will continue today across existing sites. Members of the public from Kingston & St Andrew, who are due their second dose today, will be contacted by the ministry via text and telephone with their new appointment details in the coming week.

“Yesterday, were had 22 vaccination sites in nine parishes. From reports received from the sites across the island, the blitz operations ran efficiently for most sites, with some delays and other challenges at the National Arena, primarily linked to persons who were not scheduled to be vaccinated turning up at the site,” Tufton noted.